For Eritrea, African Continental Championships are More than Just Games 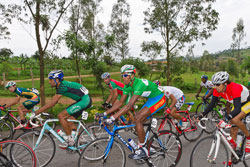 Eritrea is hosting African Continental Cycling Championships for the first time in its history. Hereafter, Mr. Temesgen Redae, President of the National Cycling Federation, gives some illustrations about the continental championships.

It doesn’t have long roots. It started back in 2005 and now it is being hosted for its 7th time. Egypt, Mauritius, Cameroon, Morocco, Namibia and Rwanda have hosted the competition consecutively from 2005 to 2010. And now Eritrea is hosting African continental championships here, in Asmara.

What was Eritrea’s input in the African Championships that was held previously?

Well Eritrean riders have been participating in the competition since 2005 in Egypt. But they didn’t take part in the 2006 (Mauritius)  and 2009 (Namibia) for different reasons. Bereket Yemane was Bronze medalist in the 2007 edition in the individual time trial competition held in Yaoundé (Cameroon). A year after, Morocco hosted the competition where Daniel Teklehaimanot and Bereket Yemane from Eritrea stood 5th and 7th in the time trials. Meron Russom and Daniel Teklehaimanot stood 4th and 10th consecutively in the road race. But our biggest achievement was last year (2010) in Rwanda where Eritrean team grabbed 8 medals in total as it excelled in the senior and U23 level. Daniel Teklehaimanot incredibly took 5 gold medals individually as he won in the ITT, TTT and road race both in the senior and U23 level.

Tell  us how Eritrea got the opportunity to host the 2011 African Continental Cycling Championships?

Well, at first this opportunity was given to Ivory Coast. However the political unrest in the country forced the Confederation of African Cycling (CAC) to takeaway that opportunity from the country and hand it to Eritrea, as it excelled in every manner in Kigali, Rwanda.

We can say that every preparation that was being made has now come to an end. We are expecting a maximum of 20 and a minimum of 10 countries to take part in the championships.

When and what disciplines will these Continental Championships include?

There has been some complaints about the racing field chosen by the cycling federation. And it looks as if Eritrea is not allowed to manipulate our excellence in the hills as the racing field includes flat and only flat roads. Why so?

It is true. That is what the Champions (Eritrean riders and coach) are saying out on the media. But this field is chosen because we didn’t have any options. We regret for not including the testing up hills of the city of Asmara in the road race as we assessed that the routes have finally wrong endings or turning points.

What benefits does the winner have for the participating African nations?

The winner of the 7th African Continental Championship in the women’s road race will automatically qualify for London Olympics 2012. In the men’s division, the points they earn in this competition plays major role in an individual and team African Ranking that is posted monthly by UCI. This will finally help the participating nations in taking part for the coming World Cycling Championships.

What kind of partnership has the National Cycling Federation with CAC and UCI for these particular continental championships?

Well the competition is held under the umbrella of the aforementioned associations but about 90% of the expenses is being covered by Eritrean sports commission. We are glad to host these championships as it brings fraternity among different African Nations. For us, the competitions are more than just games.

Inhabitants of Gizgiza make due contribution in assisting martyrs’ families

Promising Agricultural Yield Amid the Threat of Drought