“My journal does not entertain success stories” 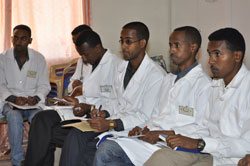 Some years back I met a journalist from the west who happened to be here as a reporter for a journal and who could not find news that fits to the policy of the journal he was working with. And I asked him why he could not find news that his employers would accept for printing. There are a lot reconstruction works and new economic developments taking place in this country. In fact you would not get splendid developmental news else where. He laughed and gave me a short answer “Success stories are not news for my journal.”

What ever significant infrastructure is put in place; the quality of school system, abundant harvest through introduction of modern machinery and irrigation system, all activities that are conducted to improve the lives of citizens in the developing world and in particular in Africa are not entertained as news by the major media outlets. Journalists who visit countries where peace and tranquility prevails do not dare to talk about it; and if they did their news is not accepted by their bosses who decide which news to print and which one to discard.

It has been taken, since long years back, to portray Africa with famine, hunger, war, corruption, and where citizens live in astronomical poverty. They love to deface the continent giving it a monster like appearance where every one there lives in hell like situation. Making mediocrity of the continent seems as if it is their daily job. These types of people who portray Africa with any thing evil are part of those people who are continuously struggling to maintain the status quo of Africa for it ever to stay with the hand me down culture rather than forwarding long term solution so that Africa could be able to feed itself.

As one observer put it “Many people in the western world still believe the mythical tales of Africa. They still believe the myths that Africans are living stone-age lifestyles in caves and trees and clad in leaves, barks and animal skins. These ideals occur despite clear representations to the west of the existence of cities and modern life in Africa. Mythically instigated evolutionary edicts of life having began in Africa, the propensity to backwardness and tomfoolery leading to the prevalent perceived state of affairs, continue to be purveyed in the media to the delight of their audience and the indignation of indigenous Africans.”

Let’s have a bird’s eye view to some resounding achievements in Eritrea since independence in three sectors; education, agriculture and health. In the education sector within the 20 years of independence the Government of Eritrea has been giving special focus on equal distribution of education. Hence, educational institutions which were confined to 538 in 1991, mostly to urban areas, have now increased to 1,708 (Education symposium 2011). To look this region by region, in order to see the equal distribution of education, in Anseba region the increase was from 99 to 274, in Gash Barka from 121 to 374, in Southern Red Sea region from 32 to 76, in Northern Red Sea region from 91 to 250, in the Southern region from 217 to 489 and in Central region from 186 to 310 (sic). The growth of institutions of education is consistent with population of each region. We could imagine, therefore, the increase of enrollment with the increase of the facilities. The number of higher education institutions has also increased not only in number but also in distribution. To date almost every region hosts one or two higher education institutions.

In the agricultural sector, the Government has been working relentlessly to develop the sector by introducing modern farming technology that would enable farmers transform their farming system from traditional to that of modern. The macro and micro dams built every where; the large and small mechanized farms are testimonies to the efforts so far accomplished. The Gerset dam with its large land put in place for cultivation of variety of crops, vegetables and fruits. The dams of Fanko Rawi and Tsimue and mechanized farms there, Ala and its fruits, Ela Bered agro-industry, Af-Himbol, name it, are all modern agricultural sites of less than 20 years of age. When fully operational they would not only serve for local consumption but they are bound to produce cash crops for export and contribute to the hard currency earning of the country. If one happens to visit a small or a big dam around the country one would find farmers busy cultivating vegetables and fruits of different variety. These are just examples from the many achievements to give some glimpse to the readers on the development achieved in the agricultural sector.

In the Health sector, Eritrea is in the top list from the developing world in its success story of its health provision. It is one of those few countries commended for its coverage of vaccination and controlling communicable

diseases such as polio, measles and malaria. HIV/AIDS prevalence has tremendously decreased. The regular intervention of the medical personnel and sustainable broad coverage of vaccination and intensive antenatal and postnatal health care services and other interventions maternal mortality ratio has declined from 998 per 100,000 live births in 1995 to 486 in 2010 while mortality rate in under-five years of age has decreased form 148 per 1,000 live births in 1991 to 63 in 2010 (MOH symposium, 2011).

All six regions of the country have referral hospitals. The main hospital of Orota is up to the standard medical facility. All the regional, Sembel and Orota hospitals are equipped with necessary facilities including surgical equipment, laboratories and are rendering standard services to the public.

According to the reports of the Ministry of Health another area of major achievement in the sector is the development of human resources. The college of Nursing and Health technology has graduated a total of 783 nurses while a total of 784 associate nurses were upgraded to nurses in the past 20 years. The ministry has also been giving degree and advanced diploma training courses in anesthesiology, midwifery, ophthalmology and psychiatry (sic). The newly established Orota Medical School is also producing medical doctors in different specialization and is expected to add the number of medical doctors and there by increase the capacity of the service rendering.
These are some few examples from the many that attest to the achievements Eritrea has been registering within the 20 years of independence. If we could talk of the new roads, airports and ports built, mining sector, the factories established including cement, medicine and food processing, animal husbandry, bee hives, transportation coverage, etc, etc. would give the full picture of the progress the country has achieved.

The above mentioned success stories are some examples for those who rightly could portray Africa is not totally in darkness but there are some hopes. And for that to happen media outlets should come out from their stereotype reporting and see the reality and tell the truth.