Promising Agricultural Yield Amid the Threat of Drought 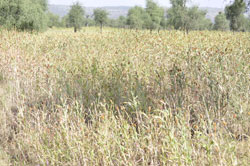 Annually, there is a very limited seasonal rain in Eritrea.  Including early rain, the country’s rainy season stretch only for about three months with a fluctuating amount of rain that are mainly affected by dry and wet cycles.  But, with such a constraint, there has not been any drought occurrence. Indeed, the county has not yet fully met the demands of food supply; however measures that correspond with the climatic condition and the nature of the rain season have been taken. Some areas of the country are very mountainous which are not conducive for agriculture, besides the erratic rainy season. These being the fact, what factors have influenced many parts of the country succeed in gathering good harvest?  How about the agricultural prospects in some sub-zones of the Gash-Barka region?

Generally, the Molqui sub-zone is a mountainous area; therefore the agricultural output has not been as equal as its geographical area. Potentially this sub-zone has a total of 15 thousand hectares that could be put under cultivation. Of the overall potential, however, around 11,200 hectares has been cultivated in this year’s summer season in which most of it is in a good condition.

Mr. Atobrhan Yosief, head of Agriculture Ministry’s branch office in Molqui, said that the Ministry has been distributing select seeds which passed through experimentations. As the time-range for the summer rain has been getting lesser, there has been a shift of focus to introduce drought resistant and fast growing select seeds.  “We are now introducing a sorghum species known as ICSV 111 which has the characteristics of growing fast.”  Mr. Atobrhan said “Besides giving bumper harvest, this select seed resists weeds that could pose threat to the agricultural yield.”

The Ministry of Agriculture has been giving due attention to upgrade farmers’ awareness regarding  finding ways of boosting production through offering various training programs, which include soil and water conservation, livestock breeding, weeds prevention mechanism and effective utilization of fertilizers.

Even though there has not been a culture of utilizing industrial fertilizers in the sub-zone, the Ministry has distributed about 900 quintal of fertilizer and also trained farmers about its utilization. Reminding farmers that crop rotation enriches mineral content of soils, Mr. Atobrhan emphasized that they should also consider cultivating oil rich seeds which are commercially profitable.

All the aforementioned trainings and experimentations coupled with the introduction of modern farm machinery have been enabling the country register a steady progress in the agriculture sector.

Being one of the 14 sub-zones in Gash-Barka Region, Molqui sub-zone has 60 villages that are grouped into 18 administrative areas. To earn their living, 95% of the inhabitants of this sub-zone are engaged in farming and pastoralism. According to Mr. Kidane Weldeslasie,  the administrator of Molqi, this sub-zone has 15 thousand hectares which is suitable for farming, out of which 11 thousand hectares has been put under cultivation in this year’s summer.

Since most crops are in a good condition, there would be an ample harvest.  Most mountainous areas of this sub-zone that cover about 172 hectors are conducive for grazing areas which in turn would increase the number of livestock in the sub-zone. The combination of these factors would enable the inhabitants to sustain the coming rainy season at ease. The adequate amount of water impounded in different sized reservoirs would also enable them to cultivate, beyond season conditioned agricultural undertaking.

This summer is also very promising that there are no worries of shortage of food supply for sufficient amount of varied crop types have been harvested albeit not to be compared with last year’s bumper harvest.
Likewise, Shambuko sub-zone, which is a home to five ethnic groups of the country that comprises 30 villages in 17 administrative areas, is endowed with huge agricultural potentials.  As the Gash River passes crossing the sub-zone, agricultural activities are carried out throughout the year.  This part of the Gash-Barka region is very conducive for farming as well as livestock breeding.   Mr. Aregay Mebrahtu, Representative of the Administrator of   Shambuko, said: “We are expecting a fair harvest this year.” He added that as they had been conducting extensive discussions with farmers, oil seeds like sesame have also been cultivated.

Delays of the seasonal rainfall at the beginning may have negatively affected agricultural yield in some places, however there is a good prospect in larger parts of Gash- Barka region to gather bumper harvest.

For Eritrea, African Continental Championships are More than Just Games