Hidden Treasures of the Denkalia 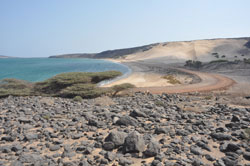 The Southern Red Sea region covering 23 thousand cubic meters of land is known for his hot climate and long coastline along the Red Sea, this region is also the first civilization place to ancient people of the region. Recent archeological findings around Mae’ebela indicate the movements of the first settlers of the region. The findings in Zula Peninsula are also evidence to the eating habit of the early settlers of the area, and it is believed that they depend on the animals from the sea for food.

The migration of the people of the region to north through the deserts of Sina and south through the Bab -el -Mendeb took place the sea routes along the coastlines of the region.  Salt, potassium, natural gas, phosphorous, cobalt, oil and iron are some of the few natural resources found in the region, including the energy that can be gained from underground heat, storms and wind in the area which adds importance to the region.

The remnants from the times of the introduction of Christianity and Islam to the region, to the historic sites and frontiers during the various colonizers in the region are still visible in Assab, Rahita, Mae’ebele, the islands of Fatma and the Assab frontier.

Relics and building remnants found around Rehiyta in a specific place known as Rehabta is believed to be the center of the marketing activities around 800 years ago.  Rehabta has strategic importance due to its location near to Bab-el-Mendeb.

A mountain located west of Rehabta also has evidences of the Italian and Turkish colonizers in the area, relics and remnants of weaponry are still present in the area. This is also the place where Eritrea, Dijabouti, Yemen and Somalia met geographically and adds strategic significance of the place.

Assab was first established by Arab merchants because it is the place where they get water after miles of sea journey. The well located at the entrance of Assab was called Assaboya by the indigenous inhabitants of the area but with time the Arab merchants unable to pronounce Assaboya changed the name to Assab.

The boat terminal in the island of Fatma also is evidence to the importance of the region where remnants of Turkish army are still present. This terminal constructed with mud, sea corral, wood and few metals adds beauty to this historical site.

Around 142 years ago in December 15 of 1869 Pastor Giuseppe Saputo  representing Rubatino Shipping Company bought land from two brothers, Sheikh Ibrahim Ahmed and Sheikh Hassen Ahmed by 6,000 Mather Treza, then the currency of Italy.  The land extended from the Mountains of Loma to Ganga Mountains. Later, in 1885 the land is officially handed over to the Government of Italy. In December 12, 1889 inhabitants of the area that were fluent in Afar and Italian established a missionary center in Assab.  Transferring the ownership of the land to the Italian Government was the beginning of the Italian colonization in the country which lasted for 106 years. It is also historic for it is the place where the armed struggle for independence ended.

Serko-Ali Mountains located at around 1886 meters above sea level has played vital role in the struggle for independence. Here are the remnants of the laboratory, school and other facilities that used by the Eritrean Liberation Front. This center established in 1967 was providing service until the 1981. In the center of the mountains there also found a natural dam that have clean drinking water.

The number of writings in various stones and mountains in the Southern Red Sea region are similar to the writing around Kohaito which are estimated to be aged around 1300 years. According to the folklores in the region, there are writing remnants explaining the medicine and healing materials for cancer and skin sickness that used to be applied by the indigenous inhabitants of the region.