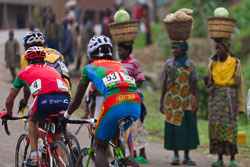 Cycling is an Italian legacy for Eritrea. Here it is better known as Corso. Its origin dates back in 1936 and since then lots of talented Eritrean cycling riders have been representing Ethiopia in big international events like that of All Africa Games and Olympics during the Hailesselasie and Derg regimes.

During the colonial periods, teams dominated by Italian riders were set up both for entertainment and sports purposed. But in most cases, Eritrean riders were devoid from participating in different local race. Only Italians were allowed to compete among themselves.

In 1961, before the start of armed struggle for independence, Eritrean sports men were struggling for their rights. As time went by, against all odds, an indigenous cycling team composed of Eritrean riders, and only Eritrean riders, was set up in the late 40s, around 1948. The team that included only native Eritrean riders was then named – ‘Africa’.

It is a wonder why at that time the first Eritrean cycling team including only native Eritrean riders would be given the name ‘Africa’ and not other name with an Eritrean touch. One of the reasons for doing so could be because Cycling Team Africa (C.T. Africa) or Eritrean riders in general had long vision of representing Africa.

This vision was witnessed within the 25 years of the team’s existence. Fessahazion Gebreyesusu, Yemane Negasi, Gebretinsae, Mehari and Beyene Simon represented ‘Ethiopia’ in All Africa game in different occasions at the time.

Moreover, Tsehaye Bahta, Mesfin Tesfay, Fessahazion Gebreyesus and Yemane Negasi were picked out from cycling team Africa to represent Ethiopia in Olympics; from Melbourne Olympics 1956 to Munich Olympics 1972. What is most astonishing is about the prowess and determination of former Eritrean Olympic rider Fessahazion Gebreyesus who, at times, used to go for training at 2 am; he explained recalling memories of that good times.

The Former C.T. Africa rider Fessahazion Gebreyesus has been on the saddle from age 16 to age 28, for only 12 years. However, in these 12 years he managed to participate in Tokyo Olympics 1964, Mexico Olympics 1968 and Munich Olympics 1972. Incredible achievements!

This time, twenty years after Eritrean independence, C.T.Africa’s vision has now come true as Eritrea, hosting African continental championships from 8th to 13th November 2011, is the defending champion. Statistical data reveal that in 1996 there were roughly about 25,000 cars in Eritrea; but the number of bicycles were as much as three folds of the total number of cars reaching to about 75,000. Thus, the love and current strength of Eritrea in front of the hegemony of South Africa and Morocco on the African cycling is not for nothing. It is deep rooted.

Last year, Eritrean star Daniel Teklehaimanot witnessed a hattrick at the 2010 African Continental
Championships with victories in the Team Time Trial, Individual Time Trial and road race. Eritrea grabbed a total of 8 medals, 5 of which were Daniel’s coveted gold. The defending champions are looking for a similar victory in their home country as the race kicks off next week.

Hidden Treasures of the Denkalia