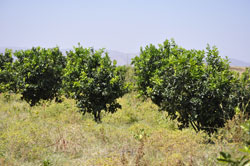 Like many parts of Eritrea, Adi-Quala Sub-zone has been showing steady progress in various domains including in agriculture, health care services, electrification, water supply and education services.

In the Adi-Quala sub-zone major agricultural undertakings have been conducted along riverbanks and through dams and micro-dams. The sub-zone used to bring in fruits and vegetables from places around Tekela area.  As efforts have been directed towards raising farmers ‘awareness, there have been major developments in fruits and vegetables cultivation. This time, Mr. Sium Ghebreyesus, Administrator of the sub-zone, said that vegetables and fruits farming have been widely practiced in a chain of areas around Maitsebri, Sebo, Kuhul-Zbi, and Adi-Koteyo through Endaghergish.  Coupled with such endeavors, the inhabitants of Sememo area have also started to give proper attention to vegetables and fruits farming which collectively brought a major transformation towards satisfying the Sub-zone’s demand.

Farmers have been effectively involved, in the period between January and April, in soil and water conservation as per the charted out work directives. Bearing in mind that such activities have been introduced for their benefit, the inhabitants of the Adi-Quala sub-zone have been playing a leading role in the efforts that have been exerted towards that end.

According to Mr. Sium, in 2006 and 2007 there was relatively a good agricultural harvest.  In the period from 2008 to 2009 there was shortage of seasonal rain which negatively affected the overall agricultural output as well as grazing areas.   Last year’ agricultural yield was remarkably promising which sustained the sub-zone till this year. Delays and uneven distribution of the 2011 seasonal rainfall indeed posed threat to the agricultural output. This time, despite delays, crops in the sub-zone are at a very promising condition some of which have also been abundantly harvested. So, 2010 and 2011 are years of bumper harvest.

Lack of effective service rendering institutions was the leading problem in the rural areas. Most notably many people used to have no access to education, health care, potable water, and electricity services. Villages in the

Adi-Quala sub-zone were also among the many which used to lack such services.  Despite great enthusiasm, enrollment of students in education was very limited due to lack of access. It has been now twenty years since they start to share the advances that have been registered throughout the country.

In the sub-zone a total of 25 schools including two secondary schools in Adi-Quala and Endaghergish have been rendering services from primary level through secondary. With the opening of new schools, a number of students have become more eager to pursue education at all levels. Owing to unremitting endeavors, the distribution of schools has increased to cover the remotest parts of the sub-zone. A new school is also under construction in Biet-Ghebriel, and a make sift school in Seretsir have been upgraded to give efficient services which enables students learn conveniently. Apart from educational institutions ranging from primary through secondary schools, 15 kindergartens have also been rendering proper services. Mr. Ghebrezgabihier Tewelde head of Education Ministry’s branch office in Adi-Quala sub-zone said: “As the ultimate goal of the Government is to provide educational access at a distance of three kilometers, we have a long journey to go,”

As regards health care services, two health care institutions have been rendering effective services, besides Adi-Quala hospital. Taking into account that this has not been sufficient to cover the entire sub-zone, a new health care institution that has been under construction in Amhie is nearing completion to begin rendering service in the near future.  Major demands of health care services have been solved. But, there are still areas that are in need of such a service. With the implementation of varied programs, the existed deficits would be substantially alleviated.

Electrification has been steadily progressing through the supply obtained from Hirgigo which in turn enabled major towns in the sub-zone gain a 24-hours electric service. Roads network in the sub-zone has been interconnecting villages and towns through crucial linkages. However, since this summer’s rainy season has caused a substantial damage to the road across Adi-Koteyo, a renovation is required.  Some villages have become beneficiaries of potable water that have been supplied from Sememo Dam. To solve shortage of potable water in the remaining villages is also among the sub-zone’s priority, the regional administration has charted out a five-year plan to address this problem.  Future plans of the sub-zone wound give special focus to the enhancement of agricultural out put.