Daniel Did It Again at ACCC 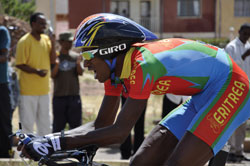 Daniel is once again African Time Trial Champion as he became the fastest African rider for the second time in a row in the 7th African Continental Cycling Championship yesterday, Friday 11th November 2011 held here in the capital. In the continental championship that is being hosted in Eritrea,  dance of Eritrean mothers, and popcorns  thrown on air as a traditional good luck omen for the riders were some of the eye catching views during the individual time trial competition. This gave the continental championships such attractive colors making it look like a historic cycling festivity. People hailing the names of cycling heroes and showing up their colored pictures from magazines appeared to be common practice of the day.

The attention given by sports and government officials opens its own chapter. Different ministers were present following the competition in detail, giving weight to the African championship, meeting CAC and UCI officials and handing prize awards to winners. All these facts added up to place the 7th African Cycling Championship in its own class and points out that fact that cycling is truly in Eritrea’s culture. The ending of the individual time trial (ITT) competition was the sweetest one of the day for the well prepared host nation as the defending champion Daniel Teklehaimanot earned his second gold medal pedaling 48.5 km/hr in the 36 km long individual time trial and winning in style. In the men’s ITT race, Daniel Teklehaimanot set off behind every rider but came to the finishing line beating his closest rival from South Africa Janse Van Rensburg Reinardt.

“When I read on the local newspaper that Janse Van Rensburg Reinardt was gunning for the gold medal in ITT and road race as a response to his country’s defeat in the TTT, it gave me more energy and another reason to beat him. To be frank I didn’t sleep the whole night. Now that I am thrilled to celebrate my victory this way for the second time in a row,” Daniel Teklehaimanot said.

“As I am no more in the U23 category, I couldn’t assure Eritrea a gold medal in the U 23 category. But deep within my heart I was sure I would take gold in the elite category of the ITT” Daniel added. The day before, when Eritrea grabbed four gold medals in the team time trial (TTT) competition beating South Africa and Morocco, Janse Van Rensburg Reinardt was one of the most disappointed riders that he spoke out before the second racing day, Janse Van Rensburg Reinardt had to say, “It is nice to be here, Eritrea is one of the best cycling nations. It is good that Eritrea gets African cycling championship here but I am disappointed with second. There is still the time trial and road race to come. I have to make up for it. I am expecting gold in the ITT and road race.”

Unfortunately, Janse Van Rensburg Reinardt was outdone once again by the gallant Eritrean. In fact, his teammate Meint Jes Louis who recently stood 18th in World cycling championship in Copenhagen beat him as well.

It is great achievement for South Africa as a team who appeared to be one of the greatest contenders of the competition. Meint Jes Louis and Janse Van Rensburg Reinardt got silver and bronze medals in the elite and additional gold and silver medals in the under 23 level, earning one gold, two silver and one bronze medals on that particular day. In the women elite category, Taylor Cherise and Moolman Ashleigh from South Africa outsmarted all the riders taking gold and silver medal consecutively in the 18 km ITT. Halbewachs Ayrelie from Mauritius who has been regularly participating and achieving excellent results in the continental championship since 2006 took bronze. As inexperienced Eritrean riders Wehazit Kidane and Senait Araya followed 4th and 5th rankings.

This time the figure 111 could mean a lot to the International Cycling Union as it has been 111 years since the world governing body for cycling, better known as UCI, was officially formed in 1900.
111 years after its foundation, here comes the President of the UCI Mr. Pat McQuaid for the first time to
Eritrea, a country with 75 years of cycling history. Mr. Pat McQuaid witnessed the Individual Time Trial (ITT) competition of the 7th African Continental Championships on Friday 11/11/11 (11 November 2011) in an Eritrean soil and gave further connection to the figure ‘triple-one’. What is more, in that particular Individual Time Trial competition, Daniel stood as the first winner of the competition as was Eritrea in the Team Time Trial two days ago.

The UCI president Mr. Pat McQuaid interviewed at 11:11am on 11/11/11 said “I was elected as the UCI president in 2005 and I have been to almost every African continental championship since then. It is important that for the development of cycling in Africa we promote this championship. For this reason as President I should be here. So far the progress has been excellent. Now we’re seeing Daniel in the world next year as the first African ever to be racing at the world tour level. Not only Eritrea, all of Africa should be proud of him. It is a wonderful achievement for him. I hope more Eritreans riders will follow him in the next couple of years. The UCI is proud of the part it played in his performance especially as he is joining the world tour team. That is why you see his pictures in many of our publications”.

Enjoying Eritrea’s cycling love in the middle of the continental ITT race, Mr Pat McQuaid added, “It is for the first time that I am here in Eritrea. And I can easily see that there is a huge support for cycling in Eritrea. I can see that on Sunday’s road race there will be hundreds of thousands of people supporting Daniel and the team.” It is to be recalled that Eritrea confirmed its status as an African champion in the 6th African Continental Championships. And so far it has earned a total of 5 gold medals from individual and team e trial competitions.

Back in 2001, the former Olympic President Mr. Antonio Samaranch had a brief look at Eritrea’s favorite sports passion – cycling – few months before leaving his post as head of the International Olympics. Local cycling race was being held at that moment around St. Marry Street the capital Asmara. I remember that in Sunday as if it was yesterday when late Samaranch had unexpectedly a brief look at the riders who were in the middle of their fierce local championship competition with such a big surprise look. His Olympic crews were busy taking still and motion pictures of the race, the frantic fans and largely of the big surprise that was clearly seen on his face. None of the fans who were around and in front of Samaranch carried about him as they were busy cheering and shouting at the cyclists. Mr. Pat McQuaid is no different in witnessing the huge support of the Eritrean cycling culture!