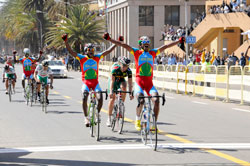 The final race today held in the presence of tens of thousands of cycling fans in the streets of Asmara was an epic event with high speed competitive atmosphere among competitors especially South Africa, Morocco and Algeria who were making unremitting escape attempts from the Eritrean cyclists. The performance of the Eritrean National Cycling Team however made Eritrea win gold and silver medals, while South African Van Rosenberg won the bronze medal.

Accordingly, Eritrean racers Natnael Berhane and Tesfay Abraha took two gold and two silver medals from the elite title and under the age of 23 in the championship.

In the prior time trial competitions held on the 9th of November, Eritrea won the gold medal and Daniel Teklehaimanot won a gold medal in the individual time trial on November 11, 2011.

Daniel Did It Again at ACCC