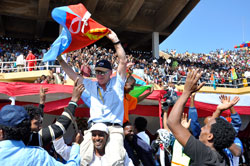 Eritreans all over the world have been celebrating the impressive victory of the Eritrean national cyclist team at the 7th African Continental Cycling Championship held in Asmara. History has repeated itself ones more in Eritrea. It is to be recalled that Eritrea won the championship in Rwanda in 2010. Mr. Michael Rob, UCI High Commissioner of the UCI, and Jean-Pierre van Zyl, representative of the technical department of the UCI, have commended Eritrean cyclists performance and fans enthusiasm. They further lauded the hosting of 7th African Continental Cycling Championship in Eritrea. ERITV has conducted an interview with them regarding their impression.  Excerpt follows

Tell us about the UCI background and its mission?

Mr. Jean-Pierre Van Zyl: It is a governing body for cycling all over the world and we are here to assist the confederation of African cycling to host the African Championship.
Mr. Rob: It looks after competitors, regulations and oversees continental championships, regional championship etc. Of course, now the world is shrinking into a small village and the development of sports in this globalization era is very imperative. And that means the UCI sees Asia and Africa as a potential for the young people to get involved in the sports, to grow and develop and be exposed to the world. I can tell you with the performances I have seen; there is no reason why in the future we can’t have champions from Africa.

With what objectives did the organization began its activities?

Mr. Rob: At the initial stage it was a gathering of people who want to introduce cycling to various nations and through time it developed to the organization we see it today. To date, UCI is engaged in training young cyclists with top class trainers at their early stage and enable them become champions.

UCI has been over a century since its existence and it is conducting the 7th African Continental Championship in Eritrea. Which team has impressed you most out of the 14 national teams participated in the competition?

Rob: Most of my experience is in Europe and Asia; I have been to Africa few times only. As an outsider, someone who didn’t live in Africa, I have to say without a shadow of doubt Eritrea impressed me more. I have the privilege of following Eritrean team in time trail. I can tell you that they are very well drilled and disciplined, in addition to their excellent skills. Of course, South Africa is very strong, but for me, it is not just about cycling that impressed me, but also the people.  As High Commissioner who always exerts to apply the regulation of UCI, it is a great pleasure to work with the people of Eritrea.

Mr. Jean-Pierre van Zyl, share with us your experience in South Africa?

The manner Eritrea has conducted the competition is of the best and I believe that they will take their place in the history of cycling in the world including participating at the historic Tour de France. Meron and Janni Tewelde are getting the opportunity to compete with professionals through the contract provided to them by UCI. I think the next two or three years, African cycling image would be changed in Europe through Daniel’s great performance. By saying that, Eritrean riders are the shining stars in Africa at this moment. Daniel is gone fighting pave the way for African rides to Europe.

What are the criteria of UCI for selecting a nation to host the championship?

Mr. Rob: From technical aspects, the nation ought to have infrastructure that would make it easily accessible. On top of this, strong will of the people and the government to host the event is very important. I can tell you here, the Government of Eritrea was exceptional and the necessary preparations were made in advance. Indeed, this African championship hosted in Eritrea is the best.

Security for instance is very fundamental to host any championship and here, the security forces did a very admirable job in ensuring the peaceful until the end of the competition. We would not find such a performance on the part of the security forces anywhere else, be it in Europe or other places.  In addition, no athlete was reportedly sick which shows the quality standard of the hotels and all other accommodations. This sort of things we often encounter in Asia.

Mr. Jean-Pierre van Zyl: I have been involved from the first African Championship in Egypt. I have seen it grow in Eritrea, and the support of the people, the Government and federation were phenomenon.

How do you evaluate Eritrea’s performance in the history of cycling?

Mr. Rob: I had the opportunity to watch the history of Eritrean cycling on EriTv, and I was very impressed with the huge number of spectators in local races.  Tens of thousands of fans jumping and cheering at the end of the competition without any intrusion. Fantastically disciplined people! With such kind of fans, you can simply move forward.

Mr. Jean-Pierre van Zyl: Eritrea has great women’s team; I saw them during the national cycling championship in June and they have what it takes to become winners. Right now, it is at a young stage of development. They would come out on the cycling podium just like their men compatriots in the next three years. It took five years for Eritrean men to dominate African cycling completion
Does Eritrea have the potential to bring the UCI for a training ground here?

Mr. Jean-Pierre van Zyl: I am sure the UCI would be interested.  Fields of international standard should be put in place and professional competition should be organized which would serve as a stepping stone to become competitive in European races.

Is there anything you want to convey?

Mr. Rob: Under the influence of UCI, Eritrean cyclists have to start spreading their wings, and strive for better competition standard. There is a need to develop the whole structure which is prerequisite for success. Bring the best coaches and commissioners to train the Eritrean coaches and athletes must have the opportunity to participate at international competitions to gain experiences. Daniel has got the opportunity and the other international teams are looking towards Eritrea for recruits. Thanks Eritrea for the fantastic championship and we hope we will be back again.

Mr. Jean-Pierre van Zyl: They have conquered Africa and now they have to conquer the world and they have a potential to do that. They have to get into teams and take the opportunity in Europe and Asia and all over the world.  The UCI can put them on the right team. Being an African advisor I had the chance to travel to a lot of African countries, I am waiting with anticipation when would be the next competition in Eritrea.