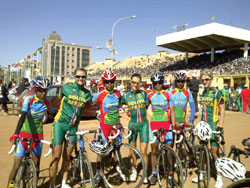 The seventh African Continental Cycling Championship was conducted in Asmara, Eritrea, with high enthusiasm and jubilation atmosphere from 9 to 13 of November 2011. Eritrea won almost all the gold medals and Eritrean athletes proved themselves that they are African champions and are the best. It is not for the first time that Eritrean cyclists demonstrated such kind of great performance. The stood African champions at the Sixth African championship held in Rwanda in 2010. At this competition Daniel Teklehaimanot once again demonstrated a par excellence and confidence in winning the individual track race and Natnael Berhane and Tesfay Abraha did it at the Road Race that was determining race for the African Championship at the national level. Once again Eritrea through Natnael Berhane is African Cyclist Champion of 2011. Hence, Eritrea is Champion of Africa for the second consecutive time.

At the Championship prominent countries like Eritrea, South Africa, Morocco, Algeria and Egypt took part. Other countries including Gabon, Rwanda, Mauritius, Cot-Devoir, Tanzania, Namibia, Mozambique, Zimbabwe and Sudan also participated. At this completion the Eritrean athletes, the fans and the government have demonstrated to the wide world in general and Africa in particular that organizing an event of such magnitude is taken seriously and is in congruence with culture of the society. From day one of the competition the organization was excellent and the credit goes not only to the concerned authorities but to the people of Eritrea. The people acted as organizers, security personnel, fans, advisors; they became every thing they could for the success of the event. They participated in every aspect of the competition. That is why no security breach was observed and the race ended splendidly as it begun. The Eritrean fans that were following the race physically by being at the place of race and those who were following through the radio deserve the victory that was finally delivered by the Eritrean athletes. In most countries when we talk about fans we mostly mean the youth and some elders who grew up with the sports family. In Eritrea fans means the youth, kids, mothers and fathers. Every Eritrea becomes a staunch fan. Why? Eritrea is taking part and Eritrea means every thing to an Eritrean.

Prior to the competition the expectation of participating countries was not only fourteen. I think many more countries were expected to come and participate. However, some could not make it may be due to different reasons. The reasons may vary from lack finance, shortage of time for preparation, transportation problem, etc. etc. My instinct also tells me that some countries were persuaded by some ill intended elements and wishful thinkers that it is not worth to travel to Eritrea. Security reason! Alas, if that was the case a big mistake has been committed and that was practically proved void and null. UCI Higher Commissioner, Mr. Michael Rob and representative of the technical department of the UCI, Pier Van Ziel both pointed out that Eritrea’s peace and security is the key domain in the success of the Seventh African Continental Cycling Championship and that Eritrea is a perfect location to carry out such great sport events. Further more they indicated that the cleanliness and secure atmosphere they witnessed in Eritrea left them unforgettable memory, and said “Eritrea is the most secure country in Africa and Asmara, the most beautiful”. Cyclists, Cherise Taylor, Louis Meintjies and Reinhardt Janse van Rensburg from South Africa, write about their daily activities in Eritrea at their personal websites. Cherise said: “I was somewhat nervous coming to Eritrea.  It is surrounded by relatively unstable countries, namely Sudan, Somalia and Ethiopia, but I can happily say that I am very pleasantly surprised by the country!” Moreover, Cherise did not hesitate to add that she even feels safe here than her home in South Africa, and appreciates the Eritrean people’s friendly welcome and assistance.

The cyclists further explained the national motto “Perfect Harmony  …for National Dginity” is definitely a motto the Eritreans live by, and that they have heard stories about Asmara being the safest capital in Africa, and after what they witnessed they believe it.

The riders also voiced appreciation to the cleanliness of Asmara City, the friendly people, the centuries-old architectural building of Eritrean cities. As regards the cycling competition, they said that it is continuing with great sport spirit and large crowd of supporters. These testimonies by the participants, I hope, would be a good lesson to those “innocents” who are easy to be persuaded to believe and not ready to verify the truth.

The athletes from all the thirteen participating countries have also the same testimony for the serenity, tranquility and peace in Eritrea. They witnessed that any one interested could walk in the streets of Asmara at any time of the day, be it mid-day or in the middle of the night and no one would dare to stare at you leave alone to approach you for any motive. The situation does not occur during such occasions only; it is the culture of the Eritrean people. And many international tourists who happen to visit Eritrea have testified that.

We have observed in several occasions where major sports or other important events are taking place else where in the world where thousands of security personnel are deployed to the streets. And yet with all the security precautions they take violence from the angry people, from people who are denied their rights, are not deterred from voicing their anger and frustration. And in the event rubber bullets and tear gases are employed to disperse and calm down the demonstrators. More over, it is not unusual news in many parts of the world to hear sportsmen from participating countries stolen their property from the hotels they stay. In Eritrean culture such a situation is considered a shameful incident and not heard about. Harassing a guest and wanting to take property that is not yours is alien to the culture. “Rely on thy toil and don’t look pockets of others” are words of advice very Eritrean learns from his/her childhood from his/her parents. This culture has been instilled into every Eritrea mind since eternity. And that is the foundation of our policy of self reliance.

The Seventh African Continental Cycling Championship has also other important aspect besides proving Eritrea is peaceful; and a place worth to visit. Every participant and the delegates from every country have some thing to talk about Eritrea when they go back home. The audience they talk to would ask where is Eritrea if at all they have never heard of. And with that people would know about Eritrea, its peace, the development drive taking place, the hospitability of the people. Hence, people who know about Eritrea will grow by the day. The next time they hear from cynical and ill intended elements about fabricated lies regarding Eritrea the response would be “Ney, you are lying!” Because thy have heard the truth from eye witnesses from their own people who happen to witness the fact on the ground. With that the tourism industry will have an impetus for growth with added effort from the part of the concerned institutions.

Congratulations to all Eritreans and our cyclists!