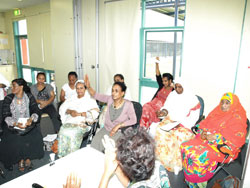 Members of the National Union of Eritrean Women branch in the Australian city of Melbourne planed to fund development programs in the Homeland.

Asmara, 21 November 2011 – Members of the National Union of Eritrean Women branch in the Australian city of Melbourne a planed to fund development programs in the Homeland.

Reports indicated that Eritrean women in Australia in general and Melbourne city in particular have been making due contribution in backing up development programs, including assistance to families of fallen heroes.

Likewise, members of the NUEW branch in other Australian cities expressed determination to live up to the nation’s expectations.

Meanwhile, Eritrean youths residing in Abu Dhabi and its environs reiterated readiness to further strengthen their organization, and thereby enhance contribution to the development drive in the country. The pledge was made during the NUEYS branch congress in that country on 18 November.

The participants of the Congress also voiced determination to rebuff anti-Eritrea enemy conspiracies.

Speaking at the Congress, a senior member of the Eritrean Embassy to the UAE, Mr. Ismail Nafie, noted that Eritrea is registering impressive development achievements.

Inhabitants of Kurkub express satisfaction with work of community magistrates