A goal to which the country is looking for 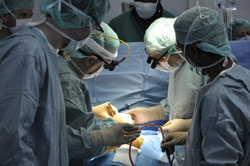 Several families would have lost their loved ones and a number of house holds would have fallen short of familial bond, had the medical science specialist in side the country and from overseas not taken initiatives to rectify varied health care complications. Long cherished dreams of families would have been shattered for most severe and complicated diseases are not easily treatable unless the medical doctors and surgeons are provided with the requisite medical know-how and sophisticated medical equipment. Mortality rate of children would have sharply risen. A number of children would have been orphaned had their parents died due to such a disease and life in turn would have become unbearable for both the parents and their children. Ultimately, the overall life expectancy of the people in the country would have drastically lowered. And many house holds would have led their lives in misery and solitude. But, thanks these had not happened for a number of specialists inside the county and from abroad have put their hands in conducting successful surgeries on patients who have been suffering from complicated diseases.

It is a well-known fact that expertise in the field of medical science could not be achieved overnight and similarly the very costly medical equipment could not have been put in place instantly. Bearing such facts in mind Eritrea has been working to develop the desired expertise through fostering mutual cooperation and through creating conducive ground for specialists from overseas in training Eritrean specialists and channeling their expertise on patients who have been suffering from cardiovascular complications for the treatment cost is unaffordable by many nationals.

It is to be recalled that in the first month of 2011 a 22-membered medical team from Germany had carried out successful cardiovascular surgeries along with Eritrean doctors. Taking this and other opportunities opened earlier

as a steppingstone to further advances of skills, a number of locally trained Eritrean medical specialists have been joining the surgical treatments through the courses that have been offered here in Eritrea and through sharing experiences from the foreign expertise. Following to the first commencement of Eritrean Doctors in the late 2009, five surgeons were also graduated in 2010 from Orottta’s School of Post Graduate Medical Education.

A group of Italian Physicians, who have recently conducted successful cardiovascular surgery on children, have attested to the fact that Eritrea is advancing in educating pediatricians.  The physicians who have been operating in Eritrea since 2004 said that Eritrea would soon stand on its own with the continued efforts to train pediatricians who are expected to conduct cardiovascular surgery. The cooperation partnership that have been maintained among varied universities and the Ministry of Health has indeed enabled the trainees enrich their potentials.

The very launching of Orotta Medical School is in fact the first of the long term strategy which now shows very encouraging advances. Following the two commencements held in the last two years on the field of Pediatrics, the Orotta School of Medicine and Dentistry is looking a head to graduate Medical Doctors and Pediatricians next month. As Doctor Haile Mezgebe, Medical Director of the Post Graduated Medical School pointed out last year, with the trainees who are expected to graduate in the forth coming commencement the number of pediatricians would be increased by three folds.

What is more significant is not the number of commencements that has been held each year but the outcome that has been achieved in saving lives of many nationals who would have suffered from diseases and the aftermath dire consequences. It is to mean, each commencement that has been held every year has continued to open a new chapter in healthcare services and making familial bonds ever-strong and their lives ever happy.
Acquiring professional skill is one facet of the success that has been registered in the health sector. Attaining acclaim by accreditation bodies is also another side of the success story in Eritrea’s health care services. More importantly addressing any major healthcare issue on the basis of local resources is the ultimate goal to which the country is looking for. Taking into account that cardiac treatments for children is very costly, that is,  20 thousand  Euros according to Dr. Yoseif Tewolde, specialist of cardiovascular surgery, the surgical treatments that have freely been offered to a number of patients are indeed a potent weapon to combat complications that need specialized surgeries.