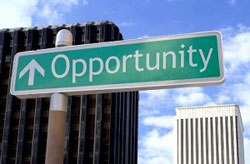 ‘There are no such things as misfortunes,’ say some people, ‘there are only opportunities.’ Perhaps, not you. But what are they?

Opportunity is a favorable or advantageous circumstance that provides for progress and advancement. It is an occasion for which everyone of us hope, some of us look for, and few of us work. Unsurprisingly, people differ in the way they conceive of opportunity. Some feel that it is a good fortune and a chance happening. Such people believe opportunity simply wanders the paths of life meeting the lucky ones on its way. Itsprocurement requires no deliberation or purpose, but simple trust and faith. However, others say that it is, indeed, a fortune and a happy coincidence yet to be attained only by searching for it with keen eyes and a willful heart. They argue that it is too fragile a thing to walk boldly at daylight in the streets but,being timid and shy,prefer to move in the dark corners and shadows lest it be discovered. And there are those who say, “Nay, opportunity is toil translated in to comfort.”It is written on the brow of every man with the ink of sweat and the hand of providence. Hence, it must be dug out of the bosom of the Earth–hewed of a rock with a chisel and a hammer.

As to misfortune, most agree that it is an event that causes stress and harm.There are even those that say it is a disaster.At any rate, it is a thing that most of us dread and many of us complain to be dogged with.People vary in the way they envisage misfortune. Some think that it isan ill luck attributable to an anthropogenic force over which we have no control. Others believe that it is the outcome of personal failure and inability. Our view on misfortune usually stems from our notion of luck. Those of us who think of luck as a coincidence are more likely to feel that misfortune is out of the human will, whereas, those of us who believe luck to be a product of human actions tend to blame.

Defining the meanings of problem and misfortune presents less of a challenge in contrast to delimiting a clear-cut boundary between them,because they are not as distinct as abstractions would have us believe. More often, they are inseparable from one another. In the words of Kahlil Gibran, where one is sitting by your side, the other is asleep at your bed. A situation which we might deem calamitous can easily become a source of great joy and success. It is not that they are two sides of the same coin as they are reflectionsfrom a single mirror!As the reflection on the mirror is the image of the one that stands before it, for a condition to be good fortune or an illluck is dependent on a person’s attitude, value system and those around him.

Attitudes, value systems and shared perspectives are not mere mental constructions. Nor are they just electrical pulses produced by our brain as a technically oriented neurologist might claim. A theoretical framework that has evolved for quite sometime now and is becoming very popular is ‘thought materialization’. Proponents of this paradigm say that our actions are the derivatives of our ideas. A thought first occurs, then is entertained, and finally is acted upon. The source of the thought might be an observation, an event, or another thought. The more there is certainty in the realization of the contemplated idea, the surer is its fruition. That’s where “according to your faith it will be done to you” comes into play. This is so for two reasons.

First, where one believes in the actualization of his ideas, he is ready to put more resources (time, effort and money) for its fulfillment. Convinced of inevitable achievement, he might even be willing to allocate the scarcest resources rather than leaving it. In fact, where there is plenty of resources at disposal, there is a higher degree of success. In cases of less resource, the wise use of available means is greatly enhanced.

Second, undoubtedness removes fear. Fear presents the greatest blockage to victory by weakening the strongest of arms, misdirectingthe boldest steps, and spoiling the sweetest dreams. Faith removes fear, and in doing so, clears vision and crystalizes intension. And it is, as the unblemished eye can see far and wide and the sound ear can hear deep and slow, the mind that fears not to examine things from all dimensions will have the truest understanding. In turn, understanding translates into practice to identify the defects of conceived plans. Finding out what’s wrong is often knowing what’s to be done. It is only then that we can apply remedy.

There is also another curious episode of opportunity and misfortune. What might be considered a bad situation for one might turn out to be the best possible opportunity for another. Here is a true story taken from ‘Get Real”, a Windmill book of nonfiction edited by David Kitchen and Sue Davis.

It was 1822 when a gun exploded and nearly killedAlexis St. Martin. The strange thing is that Alexis’ suffering turned into an amazing opportunity for the doctor who was called out to help him.The young man moaned in

agony. A carelessly loaded shotgun had exploded – blasting a 15 Centimeter hole in Alexis St. Martin’s side… You could see all his insides. The young Canadian hunter had two broken ribs, a damaged lung… a hole in his stomach.

Dr.William Beaumont looked at these injuries and shook his head sadly. The patient would die soon,very soon. In those days the only treatment for this type of wound was to slap on a bandage and arrange the funeral. But against all expectations, Alexis survived the night. Weeks became months and the young man even started to get better! But he had an embarrassing problem.The stomach hole refused to heal. So whenever he felt puckish, Alexis had to bandage his turn to stop its gruesome contents from slopping out!

Oddly enough the young man cheerfully put up with this appalling arrangement. So the devious doctor seized the opportunity to perform some gruesome gut experiments. One day, he asked Alexis to swallow a bit of raw meat on a thread. Later on, he pulled it up again to see how it had changed. On another occasion, Dr. Beaumont poked a thermometer through the hole and watched it leap about as the stomach churned!The doctor soon discovered that stomach juice is produced in large amounts when there’s food in the stomach. So he drained some of Alexis’s stomach juice out through a pipe and tried to identify the chemical content. First of all he tasted it–yuck! But as he wasn’t sure what it was, he sent it to some scientist friends. They discovered the juice contained hydrochloric acid–a powerful dissolving chemical. This is useful for breaking down food and killing germs.
Sometimes the doctor and his patient would have a row. You’ve got to see it from Alexis’ point of view. For two years, Dr. Beaumont had nursed him. But on the other hand, if there’s one thing worse than having a hole in your body–it’s being chased around by a meddlesome medic trying to terrorize your tummy. Over the next few years, Dr. Beaumont took to following Alexis so that he could perform even more horrible experiments!

Ironically, these shouting matches provided Dr. Beaumont with yet more sickening scientific data. He couldn’t help noticing that when Alexis got cross, his stomach went all red and quivery. At last, in 1833, Dr. Beaumont published his findings. It had taken 11 years of tests and tantrums. Packed full of stomach-churning pictures, the book was an overnight success. The doctor achieved fame and fortune. Yet he owed his entire achievement to one gruesome fact, he’d had Alexis’s stomach for the job!

When you are burdened with seemingly unending problems, feel sad; but don’t be discouraged, lest you might run out of the fuel of hope, which is vital for completing the rest of your life’s journey. When you come into possessionof something good and promising, be grateful and happy; but not a borderline ecstatic, for fearthat you would lose your head and go mad.Opportunity is misfortune and misfortune opportunity; because it is our perception and the way we handle them that makes them so.

A goal to which the country is looking for