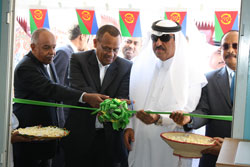 The third Eritrean community festival in Qatar was conducted from 24 to 25 November featuring different activities.

Mr. Zemehret Yohannes, Head of Research and Documentation at the PFDJ, the Secretary General of the Ministry of Culture and Arts of Qatar, Diplomats accredited to Qatar, journalists, and Qatari citizens attended the opening ceremony.

Mr. Tahir Mohammed Arei, Chairperson of the Eritrean community in Qatar, gave briefing regarding the role Eritreans residing in Qatar are playing in the nation’s development and safeguarding of its sovereignty. The significance of the festival in reinforcing national unity was also underlined.

Mr. Ali Ibrahim, Eritrean Ambassador of Eritrea to Qatar, on his part gave extensive briefings regarding the development programs in Eritrea on regional and global developments.