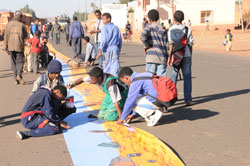 Breaking a previously set record or setting a new one is definitely a herculean task that demands concentration, toil, determination and, more than anything else, the belief in the cause of your initiation. The world dreams, but only the few do actually pursue and achieve their dream into reality.

After two years of deep research, the National Union of Eritrean Youth and Student Association tried to implement the idea of presenting the longest painting in the world from Eritrea into reality. In doing so, five committees were selected to run the project. The project which was led by artist Habtom Mhreteab included participating students from different regions of the country.

Moreover, there were some criteria the painting has to comply with so as to be registered in the Guinness, for instance, the painting has to have its own theme, limited size and so on. Thus, the committee has been working vigorously in making sure the painting comprises every necessary step. More than 800 students–including students from the Warsay-Ykealo School–took part in painting this longest painting.

“In the course of our research, we came to learn that in 2010 Mexico was registered in Guinness Book of Records for painting the longest paint in the world, which is 6.001 km in length. Later, we decided that we can paint the longest paint by enhancing the length to 7 or 8 km. We rose up with the initiation ‘why not us?’ And actually now we really did it!” said Henok from NUEYS.

Nahom Bereket, an 8th grader from Bana Junior School said, “I have been painting and connecting the canvas for the last three months. We were working enthusiastically in the effort to register Eritrea in the Guinness Book of world records. The theme of the painting is ‘pollution free world’ it depicts about our world; how it was and how it has now changed with the development of industry and the issues of pollution.”

Mr. Ian Heywood from England disclosed that what the children have done with the painting is really interesting. “I like the pictures. It is fascinating.  The pictures depict the way how the world has developed over the years, how pollution and everything changed our world. It shows a lot of hard work put into it. This is really great.”

The theme of the painting is “pollution free world” as such the presentation portrayed about our world. How it was before the industrial revolution and how we humans played a big role in destroying the beauty of our world which has caused for the thinning of ozone layer and which ultimately brings the change in world climate. “I choose this title because it’s a major issue to our world. Nowadays, our Earth is facing various climatic changes because of the pollution we are creating.

“The idea was proposed by the NUEYS, a number of artists were asked to participate in the competition to come up with a theme for the presentation. And, my idea to draw a storyline that narrates the changes in our environment and address the global issue of global warming,” said the designer artist Habtom Mhreteab.

The proposal of the NUEYS was to paint the longest painting in the world that also tells a story and I thought the storyline that could stretch this far and farther more was the topic of environment. Moreover, environmental issues are being addressed on a daily basis and we can witness this through the daily news headlines concerning this issue. The topic is both timely and essential; it is one of our world’s grave concerns. It is also a broad subject matter that could continue on many canvases. That is why I chose the theme to be ‘pollution-free world’.

It is always favorable to have a reference point when you set out to do something and as such referring to previous work records of such events have helped us approach this work more easily. And in the same tone, children were called upon to participate in the painting process of the presentation. In the project over 800 students from different regions of the country participated and the sketch covers 150 meters to 200 meters.

“The students were working with shifts along with their studies and with the exception of the holiday leaves we worked on this presentation for 59 days. As you have seen the paintings, one can’t even finish seeing them one by one since the presentation is very long that stretches for seven kilometers without interrupting the story or cutting it short, but what kept me going was to represent Eritrea in such activities. This gave me motivation. I am very much grateful and excited to participate in such event of naming my country among other countries in such aspect,” said artist Habtom.

The painting was measured by five professionals: Dr. Tadesse Mehari , Executive Director of the National Board for Higher Education; Dr. Seyfe Berhe, General Manager of Global Resources; Dr. Michael Gebrehiwet, Adviser in the Ministry of Health; Artist Michael Adonai and Ms. Senait Lijam, Director General of Land Transportation Department in the Ministry of Transportation and Communication. They have witnessed the official measurement of the longest canvas painting in the world which is accomplished by over 800 students. They have witnessed that this longest painting is measured 7.116 km breaking the previous record set by Mexico. The painting was finally measured and reported back for further inspection and approval to the headquarters.