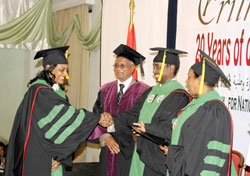 A total of 34 students of general medicine including 5 females today graduated from Orotta School of Medicine with Doctorate degree.

Asmara, 3 December 2011-  A total of 34 students of general medicine including 5 females today graduated from Orotta School of Medicine with Doctorate degree.

Speaking at the graduation ceremony, Ms. Amna Nur-Husein, Minister of Health, explained that the main objective of the Ministry is to provide satisfactory service with good standard in which members of the general public secure health service, and thereby make effective contribution to national development.

She further explained that the Government has been working hard giving priority to health service, and as a result diseases like Polio and Tetanus have been eradicated from the country, in addition to the reduction of a number of other diseases.

Prof. Andemariam Gebremichael, Assistant Dean of Orotta College of General Medicine and Dentistry commended on his part the endeavors that the Government has exerted, in collaboration with partners of the College. He also indicated that a number of scholarships are being offered to the students for further studies.

Representative of the graduates noted that vigorous efforts are being made by the Government towards expanding health services to all parts of the country and developing competent manpower, in addition to the opportunities created for the youth.

Dr. Fithawi Girmai, one of the graduates, who achieved excellence, on his part appreciated the opportunity thus provided, and assured to serve the public with dedication in accordance with the expectations of the Government and the people.

Mr. Mohamednur and Mr. Girmai Gebrekidan, both parents of graduates said that they are proud of their offspring achieving such a goal, and called on the graduates as a whole to provide fellow citizens with exemplary service.

The graduates completed courses in the field of Pediatrics, Internist and General Surgery, among others.

It is to be recalled that Orotta School of General Medicine and Dentistry graduated the first batch in 2009.