The repeated crime committed against Eritrea would but reinforce our development drive: Nationals 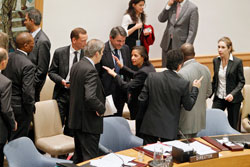 A number of nationals said that the UN Security Council sanctions resolution against Eritrea adopted at the instigation of the United States would but reinforce our development drive and national rebuff.

Asmara, 7 December 2011 – A number of nationals said that the UN Security Council sanctions resolution against Eritrea adopted at the instigation of the United States would but reinforce our development drive and national rebuff.

The interviewees noted that Washington’s hostility against Eritrea is not new, but one that has been going on for more than 60 years under different guises, and that we would again emerge victorious as ever through work and steadfastness.

Ms. Abeba  Gidei: Persistent acts of sanction would have no affect on us, but only make us strong and heighten our morale;  despite sanctions, we managed to accomplish development tasks on the basis of self-reliance;  there exists no famine in Eritrea; unlike puppet regimes like that of the TPLF which serve the US Administration, the Eritrean government is engaged in implementing various development programs, and thus we are gathering bumper harvest.

To my understanding, President Isaias was denied access to address the Security Council because the enemy quarters are well aware that he has the capacity of playing influential role in the entire region, on top of his top leadership qualities. Moreover, they don’t want to see the President’s caliber and resourcefulness to spread in the region; they don’t want other countries in the region get influenced by his ideas and rise up in protest.

Mr. Mana Bahre: We have emerged victorious over the conspiracy weaved against us during the past 10 years; as I see it, the fact that they brought charges against us at the UN attests to our high ground status and there is no doubt that if we argue our case face to face, we would definitely emerge winners.

Jellani Ibrahim: “Eritrea achieved its independence through struggle and not as charity from the US; had it been in the position to decide Eritrea’s fate, we would have never attained independence; and the latest sanction is but a continuation of the past; the US is not ready to see a powerful nation that is influential and capable of playing positive role in bringing about peace and security in the Horn of Africa; as Washington remains keen to keep the position of dominance over puppet client regimes in the Horn of Africa, it stands against Eritrea becoming a developed nation that plays active role in the region.

Mr. Yemane Girmatsion: The Government of Eritrea and the PFDJ have emerged victorious foiling different conspiracies; we have thwarted conspiracies in the days of the armed struggle for independence, and at present that of ensuring development and safeguarding the nation’s sovereignty. It is not a new phenomenon; we are not going to bow down but get stronger because we have the organization, unity, capacity to implement the set programs and above all a clean leadership.