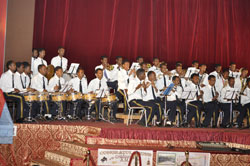 Music in Eritrea has a profound background. All the nine ethnic groups possess different musical instruments, beats and rhythms. Through history, music in Eritrea, like many other parts of the world, was confined in regional premises. With the advent of media technology however, the sound of the beats and the ingenuity of folkloric music Eritrea possesses started spreading its rhythm to the rest of the country and the region.

The one thing which was common between the music from the ages and those sang during the 20th century is that most of the artistic works of music played in Eritrea narrate stories of tribal heroes as well as religious and cultural holidays. The background of music in Eritrea lies deep and goes as far as centuries, but the organized and composed blast of Eritrea’s real musical talent was yet to be unfolded in the late fifties and sixties.

Those were the times Eritrea was under consecutive colonialism and with the coming of musical instruments; recording studious as well as the mixing of traditional instruments with the imported ones, music in Eritrea had its rebirth in a more professional manner. Maintaining the cultural originality of music and infusing a strong sense of nationalism amongst citizens were the core elements of musical works during those times.

All the classic songs sang and the music played during those times is a reflection of the original Eritrean music summed up with the then state of the art instruments. The lyrics were all written in a way to aspire the idea of nationalism and why the foreign colonizers should not be lords of our own land. Yet, all the songs were sung openly with no lyrical mischief.

With the coming of missionaries and the Italian colonization in general, the advent of music and composed musical performances set its beginning in Eritrea. Nonetheless, it took almost half a century to transform and lay grounds for the Eritrean music to a composed and more professional musical play.

Hence the beginning of modern music in Eritrea had its beginning in the late 1950s where a handful of indigenous Eritrean musical talents started appearing in an organized manner, which they then called the Asmara Theatrical Association. Indeed, the music they played then and the songs they sang laid the foundation for the contemporary works of art in Eritrea.

The songs played back then mainly focused love contents metaphorically exposing their strong sense of nationalism and the need for an independent Eritrea which was then under federation with Ethiopia. All the songs sang during those times still possess a classic effect not only to the elders but to the young generation as well.

When Eritrea was put under full Ethiopian occupation in 1961, proud Eritrean fathers started an armed revolution against the Ethiopian colonizers under Emperor Haileselasie. Parallel with the armed resistance, musical revolution also became an asset to raise the awareness and build an unshakable strong sense of nationalism within the Eritrean population.

Especially with the start of the Eritrean voice of the masses in 1979, all the revolutionary songs made and composed in the terrains of armed resistance front made their way to the ears of the entire Eritrean population.

The songs then had no hidden meanings as opposed to those sang from the colonized parts of Eritrea, they were fresh and liberally composed from the freed corners of Eritrea. The valiant freedom fighters had their weapons aimed against the colonizers and the musical front had another weapon that spread messages of freedom and resistance, where many fighters as they say had acquired their spirit from.

The best part of the revolutionary music was that the Eritrean Peoples Liberation Front housed all the nine Eritrean ethnic groups under its wings. This freedom and bringing together of all citizens for one purpose exposed the untamed riches of beats and rhythms of all cultures.

Apart from entertaining the valiant fighters, music during the revolution played a leading role in boosting the will of the perseverant fighters, raised the inclination of the local population to join the armed struggle while on the other hand terrorized and killed the spirit of the enemy.

Their composition was so strong that no one would believe they were recorded under trees or hideouts of the revolution under foothills. Indeed, those were the times all the cultures of Eritrea got their opportunity to get acquainted with modern musical instruments and spread messages of vision, courage and freedom.

Maintaining the cultural values of Eritrea was also among the major elements which were worked upon during the revolution. Maintaining the originality of the true Eritrean rhythm and modifying the folkloric musical works of all cultures into modern music without loosing their originality was amongst the major achievements.

The bonding of the revolutionary artists and the legendary ones produced an extraordinary blend and opened yet a bigger opportunity to the growth of music in Eritrea and the upbringing of young talents. The legacies of independence opened a way for the Eritrean artists to sing of any topic or idea they could come up with. The foundation of modern music laid during the sixties and the revolution saw their start go all the way to the top.

Nonetheless, like every other aspect in the country, music also had to redirect its way and become the main tool of strength for Eritreans when the TPLF attempted invasion of Eritrea in 1998. The new artists who sprang with independence formed an amazing mix with the revolutionary singers in fighting the enemy with their ever strong lyrics and rhythm.

Those times were the stage which really attested to the strong sense of nationalism and unity Eritrea ever boasts, and that resistance against invaders was written all over Eritreans. The resistance through music nurtured by Eritrean fathers of music was well maintained by the young artists who passionately wrote and effectively rebuffed the enemy ordeals.

Yet, music in Eritrea is not only related with revolution and resistance, although that can be mentioned as the unique Eritrea’s artistic gift, but lots of musical works were eloquently written over the years narrating stories of love, social activities, culture and beauty.

Victimizing Eritrea, the US does it Again!

The pursuit towards success Bearing Fruit