A moment with Afar Dictionary Author 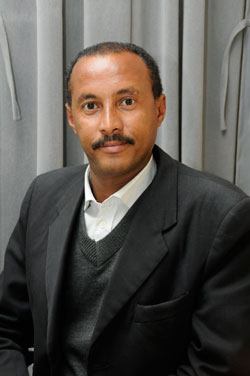 Recently an Afar dictionary for the first time was published by Journalist Bairu Habtesilase, aka “Palo Z Peradizo”.  Making up 5% of the population, Afar ethnic group live in eastern part of Eritrea and during the successive colonial periods they were deprived of from experiencing any developmental progress. Nevertheless, the Government of Eritrea right after of independence has exerted the necessary effort to expand basic social services to outreach those people.  Education was among the service-rendering establishments distributed in almost everywhere in the area.  Mr. Bairu happened to be one of those teachers assigned in Afar inhabited area and get acquainted with the language of Afar for the first in his life. Shabait has conducted an interview with Journalist Bairu regarding his recent dictionary.  Excerpts follow:

Would you please brief us with your background and how you came to learn Afar language?

I was born in Addis Ababa in 1971 and came to Asmara in 1991 following my study of one year civil engineering. I was assigned to work in Assab after receiving teachers training and was acquainted with Afar language for the first time. During my four years stay in Assab, I used to send articles to radio, newspapers and magazines. Then I was transferred to Afambo semi-urban, and began to admire the culture of Afar ethnic group and interested in learning more about them.

What were the methods you used to master Afar language?

While I was teaching English in Afambo, my students were teaching me Afar. I was asking to translate for me in Afar the English words I was teaching them and I write them in my notebook.  I was able to communicate with

those students who could speak Tigrinya. I was also participating in social gatherings and establishing close ties with them.  I feel delighted whenever I encounter former students, now grown ups and engaged in nation-building process

Tell us more about the Afar dictionary you published?

I believe a person should make optimal use of the environment and situation s/he is put on, and I accepted the people of Afambo as they were. And the dictionary is the outcome of the admiration I have for the people of Afar. When I bid them farewell, I promised them that I would prepare a book that would serve them and their children. During my stay for two years in Afambo, I learned around 1,800 words. After 10 years, I was able to launch an Afar dictionary written in Latina, Tigrinya and English in Assab on October 2011 where Afar community participated. The dictionary comprises more than 2,000 words.

What inspired you to prepare the dictionary?

I always had the desire to contribute something in realizing the basic principle of the Government to ensure social justice across the country. Writing a book in other languages rather than on my own to help those who want to learn other languages gives me great satisfaction.

Do you have a plan to improve this dictionary?
Yes, I have a plan to further upgrade the dictionary, in addition to publish other educational and tourist guiding books in collaboration with Afar scholars.  The feedback was beyond my expectation and it motivates me to work hard to satisfy readers.

Over 100 female participants of National Service receive training in administration