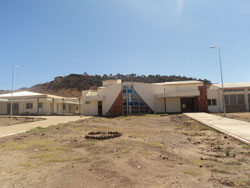 A number of development programs were promised in 2010 to be implemented in 2011. Thus, in 2011, most of the promised development activities have been successfully implemented to date.  Vast areas that once used to be wildernesses have been transformed into large agricultural areas. The old scenery of the country has then been utterly changed and urbanized for steep slopes have now been penetrated through spacious road networks which are now connecting geographically segmented areas. The all-round journey to development is in fact ceaseless.

In the year we are about to fare well, the Southern Region has laid viable infrastructural accomplishments that would accelerate the advances that are yet to be witnessed. Taking into account the vastness of the tasks set out to be implemented; many companies took part in the construction of health care institutions, provision of potable water and other facilities.

In the construction of healthcare facilities alone, varied undertakings that are worth 77 million Nakfa have been implemented in 2011. So far, the first phase of the construction works of a new hospital in Senafe which is a modern one in all standards has been finalized. Of the total budget allocated for the construction of healthcare facilities, about 50.2 million Nakfa was dispensed for Senafe hospital. Once the new hospital is finalized, there would be no travels to Adi-keyh Hospital for the inhabitants of Senafe sub-zone would finally avail themselves of the services provided in their respective locality.

A new center for fistula treatment is also under construction in Mendefera. The center which is expected to render regular surgical services for a number of women who suffered from fistula complications for long has been implemented at the cost of 4.s million Nakfa. Besides, a school for Associate Nurses that is worth of 13.4 million Nakfa is under construction in the same city.

Another area of the advances whose impact in healthcare could not be viewed lightly is the provision of potable water. Since is closely associated with people’s health, the tasks of implementing water supply projects is highly

In addition to the aforementioned projects, a 10 million Nakfa Project have been fully finalized in the villages of Serha, Emba-Bdhan, Mai-Chada, Kokobay, Tsada-Korso, Embhisa’e and Gubo.  Besides, about 3.2 Million Nakfa has been dispensed for the finalization of wells construction works in 25 villages of the Sothern Region.

The commendable tasks accomplished in various domains just in less than a year are indeed very appreciable that in the course of visiting the sites one admiringly witnesses the remarkable advances that have been registered everywhere in the region.

Not confined to putting in place healthcare and water supply projects, the region’s Department of Infrastructure has constructed and renovated a number of buildings at the expense of 26.5 million Nakfa. Accordingly, a telecommunication repeater stations were constructed in Digsa and Knafna. The two projects are worth 4 million Nakfa. The renovation of the Mendefera benefit scheme building complex and Dekemhare bus terminal and the construction of Debarwa milk reservoir tanker, and the establishment of pump houses of Sememo and Adi-Bahro are also some among the infrastructural activities the Department of Infrastructure put in place at huge expenses.

Varied construction activities are also underway to upgrade Mendefera’s Stadium; this also required 12 million Nakfa. What is more, a river at the gateway to Tserona was once a major topic of complaint for it was creating difficulties for vehicles crossing from and to Teserona. This time, there would be no challenge for the newly constructed modern ford road would enable vehicle cross the river without and obstacle.

The above mentioned undertakings are indeed smaller portions of the overall plan; the major development program was, however, in the education sector. According to Eng. Kaled Saleh, Director of Engineering Services and Projects Management of the Southern Region, the schools constructed in this year alone exceed the number of schools constructed in the region in the past 50 year.

Work accomplishments so far registered in the Southern region are in fact very numerous. But, giving a witness through making a visit to the sites where these tasks have been implemented is indeed very rewarding. As the development journey is ceaseless, varied projects implemented each year have become a cornerstone and greater leap points for further achievements.

Where do all the Groundless Accusations against Eritrea Emanate From?

A moment with Afar Dictionary Author