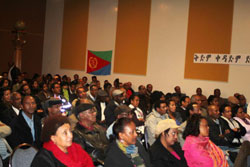 San Jose, CA- December 10, 2011
Eritreans from all over San Francisco Bay Area; Santa Rosa, Oakland, San Francisco, Sacramento, Fresno, Stockton, San Jose and others congregated to be part of “Tewerwer Mekete”, in vision of Eritrea’s solid position and opportunities, beyond the current symbolic Unjust & Unfair Sanction, Resolution 2023, done out of belligerence, for the second time in two years, right before Christmas.

After the Mekete Chairman of San Jose and environs opened the historic Seminar, as usual, the program started with a moment of silence to honor the selfless Martyrs who gave us their precious lives for us to live in dignity. Then came the moment of truth, the historic and timely Seminar, presented by Sophia Tesfamariam that Eritreans of Bay Area at this Christmas season of peace had craved for. People were delighted to learn and share what the concepts of “UNfair”, “UNjust”, and “Illegal” sanction meant in real terms, explaining chronologically, its historical origination, the content of it and what it was designed for, within the so called, “Security Council” of the United Nations. It was crystal clear that the sanction was not an African initiative. The fabrication of 2000 Eritrean Troops in Somalia, in justification of Somali invasion by Ethiopia, the 6 hours Addis Ababa fabrication meeting of Meles and Susan to craft ploys, as exposed in Wiki Leaks, was clear for everyone to learn. The Seminar also had exposed the positions of each members of IGAD, in considering Sanction 1907, who knew that the case was not an African Initiative but agreed to have it related to Somali’s case, following the rejection of South Africans to table it in the Security Council.

In this Seminar, the anatomical structure and the physiological functions of the Security Council were exposed so we could see where we stood before and where we were heading at this time. This Seminar had proved wrong to the participants, that the attempt of chocking Eritrea economically, by sabotaging the mining industry and psychologically frustrating Eritreans in stopping the 2% remittance so there would be a wedge between our people and government. The participants indicated, Eritrea stood firm, not only within its own borders and people, but also internationally. Now, after about a week old sanction’s honeymoon was over, the World has learned what the act meant, including the Russians who insisted that “There was no evidence” to accuse Eritrea. South Africans were not different in the issue either, who stated that the actions were “Politically Motivated”.

In this seminar, the failure to their illegal adventure of destabilizing and the futile attempt to fabricate and black mail Eritrea in supporting  Somali fighters was exposed when the Kenyan ministers suggested that we be part of their coalition forces in destroying Somalia. It meant if we joined their adventures, we would be justified and “free” of sanctions.

y saying, “No one would be there”, as much as the practical response of our Government in its Website, to the same day of passing sanctions, by saying “ab siraH alena”, which meant “we’re at work” – Don’t bother us kind of thing. The sabotage and failure of Susan Rice in denying Eritrea’s President, H.E. Isaias Afwerki, enough time to get to New York and thus his inability to show up, even the absence of Eritrea’s UN Amassador, Araya Desta from presenting himself in this trap of the UN Security Council meeting was a strategic loss to Susan Rice and diplomatic triumph for the Eritrean government and its people, it was recognized.

This seminar had also compared and contrasted the interest of the big powers to the satisfaction of “tiny” Eritrea. Despite US action in its “Carrot or stick” approach to sabotage votes within the Security Council resolutions, within its own Corporation of the United Nations”, and reflecting on Eritrea’s sworn enemies’ attempt to diplomatically isolate Eritrea and representatives of Eritrea, it also reflected on the indisputable strength of Eritrea’s solid foundation of its own people and resources, to the popular support our politically independent government has, inside and out of the country, and other related strengths in between were also highlighted. This seminar also had reflected on the success of the ongoing petition drive against the illegal sanction which made enough noise to a level of opening an office who would handle the Eritrean issues alone, within the United Nations office.

Open Question and Answer session followed after the brilliant presentation of the seminar by Sophia. People got appropriate responses to their satisfaction. A timely poem “Mekitu Account Kifetu” was read to reflect what we should do in the remaining time left in this petition drive of December 2011.

This sanction, not only was it just symbolic to its cause, but it also exposed who were who, exposing each country who had stake in Somalia’s affairs, besides being a watered down resolution that failed to stop the 2% remittance, as all other countries, including the new comer of China to have taxed its citizens abroad are practicing, just like the American were doing. It couldn’t stop the interest of all the big companies who had stake in this mining and who newly are joining the forces of truth in fighting the forces of evil, against this unjustified sanction. Again, this ill-advised action was watered down to a level of “Monitoring the funding of Al Shabab”, which was never proved to begin with.

Petition to the White House’ forum of “We the Government” Website, by creating accounts to people who needed help, so that Eritrean Americans will be connected to their respective US government, directly, was run the energetic and successful young Eritreans in San Jose area, the YPFDJ. Eritrean defiant mothers, the San Jose’s NUEW also prepared and served delicious food to the public, following the seminar. Members of the Eritrean Community Cultural & Development Center, AKA the Eritrean Community Center, were also part of this historic event.
Against all the “Sanction” odds, we will Never Kneel Down!
Eternal Glory to our Martyrs!