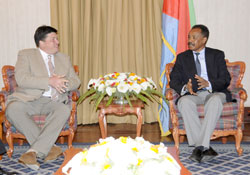 President Isaias Afwerki received and held talks in the morning hours today at the Denden Hall with the special envoy of President Dimitry Medviedev of the Russian Federation headed by Mr. Mikhail Margelov.

Asmara, 17 December 2011- President Isaias Afwerki received and held talks in the morning hours today at the Denden Hall with the special envoy of President Dimitry Medviedev of the Russian Federation headed by Mr. Mikhail Margelov.

During the meeting, President Isaias commended the initiatives taken by the Russian Federation to send its special envoy to Africa for constructive engagement and said that the uni-polar balance of force created in the wake of the end of the Cold War has entailed negative consequences in ensuring international peace and economic growth. The President further added that the erroneous policies pursued by the US in the Horn region of Africa in particular have spawned regional instability as well as the obstruction of justice and the rule of law.

President Isaias pointed out that although the Eritrea-Ethiopia Boundary Commission (EEBC) that was established in accordance to the Algiers Agreement drawn-up by the US, the EU and the UN, has officially closed its doors completing its task of demarcation and delimitation of the border between both countries, and despite the fact that it submitted its ruling to both nations as well as to the United Nations, the implementation of the final and binding arbitral award has not been realized to-date because of the direct acts of hostility and obstructions imposed by the US Administration. “This has become a root cause of instability in the Horn region of Africa” – the President underlined.

President Isaias also indicated that all allegations made against Eritrea are fabricated lies in their totally and also fail to present concrete evidence whatsoever in support to the charges made. “The sanctions resolution of December 2009 and the recent sanction resolution adopted on December 5, 2011 are therefore an extension of US instigated misguided polices against Eritrea” – the President emphasized. He also pointed out that Russia, in view of the fact that it is an influential country and a member of the Security Council, has a vital role to play in the execution of justice and fairness in the world in general and the Horn region in particular.

During the meeting both sides agreed on the need to enhance in folds the already initiated and gradually developing educational and technical cooperation between both nations, giving impetus to investments and exports, as well as creating opportune grounds to work together in enhancing overall cooperation between Eritrea and the Russian Federation.

Moreover, President Isaias Afwerki and the special envoy of the Russian Federation held extensive talks on current regional as well as international developments.

In a statement to ERINA following the meeting, Mr. MiKhail Margelov said that the discussions he held with H.E. President Isaias Afwerki have been indeed helpful and that Eritrea and Russia hold similar views on the matters of importance raised.

In regards to the sanctions resolution adopted against Eritrea on December 5, Mr. MiKhail said “Russia maintains that issues should be resolved through discussions and understandings and does not believe in sanctions”. He also reiterated that Eritrea and Russia are on the same side of the fence in regards the matter.

The issue of the national unity