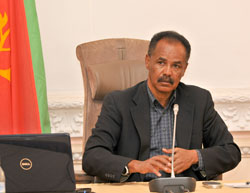 In a meeting it conducted today at Denden Hall here in the capital, the Cabinet of Ministers approved the budgetary allocation and implementation of overall national development in general and the integrated development plan for 2012, following the presentation of a working paper by President Isaias Afwerki outlining the political, socio-economic, cultural strategy for the nation’s progress.

Asmara, 20 December 2011- In a meeting it conducted today at Denden Hall here in the capital, the Cabinet of Ministers approved the budgetary allocation and implementation of overall national development in general and the integrated development plan for 2012, following the

presentation of a working paper by President Isaias Afwerki outlining the political, socio-economic, cultural strategy for the nation’s progress.

In the working paper, the President pointed out that endeavors towards ensuring food security would continue in an intensified manner both in an organizational and operational sense. He further explained the programs underway to reinforce agricultural development through rainfall and irrigation farming, with particular emphasis on developing export- oriented production and for internal consumption. President Isaias also enumerated action plans to develop infrastructural facilities for the fisheries sector on the basis of internal resources and partnership, besides raising the capacity of salt works. He also explained action programs for effective and judicious utilization of the country’s land, water and environmental resources, as well as upgrading professional and organizational capacity for the realization of such tasks.

The President also elucidated the work programs mapped out for the expansion of electrification across the country and reinforce  power generating resources, in addition to mobilizing resources for harnessing mineral potentials, introducing solar and wind generated power resources, among others.

As regards trade and industrial sectors, the President  outlined programs drawn up to develop domestic trade and export  both in quality and scope. In this regard, he indicated that due attention would be given to promote the private sector and create broad investment opportunities for the private sector, as well as strengthen service- rendering institutions. Moreover, President Isaias gave a detailed outline of the envisaged work programs to streamline tax collection methodologies, establish large and small- scale processing industrial plants, among others.

In connection with the transport and communications sector, he pointed out that efforts would be stepped up to further develop land, air and sea transport facilities at substantial expenditure. To this end, the President explained action programs dealing with the development of airline service, reliable land, railway and sea transportation, along with the requisite facilities.  He also indicated that work programs have been outlined to upgrade existing road network in the country, and that the asphalting of Asmara-Mensura-Agordat, Agordat- Adibara-Tessenei, Asmara ring road, Tessenai-Omhajer, Medefera-Barentu, Foro-Assab, Massawa-Karora, Keren-Nakfa, Foro-Adi-Keih and Agordat-zara roads would get underway in 2012. Repair activities on roads in different parts of the country would also be undertaken, the President added. Moreover, he outlined actions programs envisaged for the New Year regarding the upgrading of airports, sea ports and navigation services, in addition to constructing secondary level airports.

In the domain of water conservation programs, President Isaias pointed out that more projects would be launched to cope with the growing demand of water supply for domestic and agricultural purposes, and that  the construction of micro-dams, irrigation canals and the like would be give due attention. Similarly, he indicated that the necessary strategy for the construction of residential building complexes on the basis of reliable supply of cement, wood and iron materials, among others, has been mapped out.

In connection with programs drawn up to enhance the expansion of education, health and social security services, the President explained the strenuous endeavors underway to promote education that is up to standard  both in content and scope, as well as enhance the capacity of teachers. In this connection, President Isaias gave directives dealing with teaching methodologies towards streamlining courses in the Arabic language in all schools in the country.

Regarding the information and diplomatic efforts, President Isaias explained the outlined programs to reinforce popular, political, socio-economic, information and cultural rebuff and clarified on the efforts to qualitative programs strengthening of the presentation and dissemination of visual, audio and written information materials.

Regarding the judicial institutions, the President gave extensive account on the need to enlarging the infrastructural facilities of justice facilities throughout the county so as to ensure efficient and timely rendering of services that would ensure stability, peace and justice.

With regards Local Administration, President Isaias pointing out that the study that has been conducted to clarify the objectives and to streamline the structure and organization of the Head Office of the Local Administrations, regions and its offices as well as sub-zones is already concluded, and is ready for implementation and explained the expectation of contributions of line ministries in ensuring the congruent implementation of national and regional programs.  Concerning national development activities and streamlining national strategic policy, the President underlined the need for compiling development programs of all ministries at the documents of the national development programs and pointed out that the policy regarding international cooperation and partnership is on process.

Proceeding to the financial sector, President Isaias gave extensive explanation on regarding budgetary allocation for charted development programs by line ministries and local administrations. He also extensively clarified on the program charted to realize macro-policy program, to protect the balance of income and expenditure, exploit general resources, and strengthen the collection of income, completion of market administration and revising monetary policy.

President Isaias who explained that we have been able to register big development activities is because unlike what we witness in other countries we possess committed a government and government employees who work without expecting salaries expressed his appreciation for the EDF members and government employees that endured all life challenges and pointed out that salary adjustment would be made step by step to government employees and study has been initiated for its implementation.
In conclusion, President Isaias gave briefing regarding programs to strengthen study and research institutions in all sectors, human resources development and developing professional and institutional capacity.

The Cabinet Ministers upon hearing the detailed presentation of the President discussed on the short and long term programs sector by sector and with national development measurements.

The Ministerial Cabinet in its extensive and deep discussion assessed the integral national development programs and projects that would be implemented by different sectors and the contribution they would have in improving the lives of citizens. It further evaluated the short and long term programs of every sector could have in improving the existing and future demands of citizens, in stabilizing market, in expanding trade and industrial activities, in creating job opportunities and increasing productivity.

The Ministerial Cabinet also conducted sector by sector in-depth discussion on sectoral policies and development programs and their impact in ensuring food security and shelter, provision of basic energy, water, transport, education and health services. Furthermore,  the Ministerial Cabinet citing the contribution of all the development programs in introducing modern technology and recruiting human resources equipped with profession and capacity, underlined the contribution of integrated development programs in improving the living standard of citizens in transforming the socio-economic and developing the culture of citizens, recommended the continuation of the efforts to strengthen capacity of governmental and public sectors coupled with modern information technology.

In conclusion the Ministerial Cabinet, adopting resolution and directives on the implementation of the discussed national development programs concluded its one day meeting.