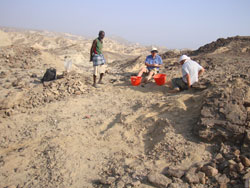 The actual chain of human evolution still remains a mystery. The more new findings are discovered, the more the mysteries are heightened. Many archeological findings that were expected to fill the gap of human evolution are far more challenged with the discovery of new findings. Fossil findings that were once recorded as the more ancient have now been overtaken by far more ancient findings. The discovery of new fossils in Eritrea is one of the earliest of similar findings in the African continent. Despite being the ancient fossils, the findings have not yet been fully segmented into pieces and are more appropriate to the reconstruction of the earliest ancestral evolutions. Encouraged by such like discoveries, Eritrea’s National Museum has been working in a wide range of sites along with a group of archaeologists, anthropologist, geologists, sedimentologists, paleontologists and paleoanthropologists form the Universities of Italy and France. All these professionals have been giving a witness to the ever-going findings through personally participating in the fields of excavations and later lab researches.

With regards the new findings discovered at the sites that have earlier been spotted for their abundant pre-historic remnants, the researchers are of the opinion that these findings are just the continuation of the research work that has been conducted in the Buya area for more than a decade, together with the last year’s discovery at the site of Mulhuli-Amo.

The new discoveries of November 2011 in the same site of Mulhuli-Amo have indeed vital importance in adding a variation to the Gallery of the National Museum of Eritrea. Now, different Research Scientists from different Universities have now joined the research venture.

Roberto Machiarelli, Professor of Human Paleoanthropology at the University of Poltiers-France, also puts his remarks of the research ventures that have been underway in Eritrea as follows: “I started to work in Eritrea since fifteen years ago, so I have a very good experience here in the country. And I am very happy to see the new discoveries here that have passed very important and continued project cooperation, the Eritrean-Italian Danakil Expedition, and I hope we will meet next year in the same room with other new fossils.”

The Professor also said “This year has been special for us because together with last year’s discovery, at the site of Mulhuli-Amo, we have some significant discoveries that have attracted prominent research scientists for

The unique characteristics of the fossils that have been discovered in Eritrea have in fact attracted a number of researchers of the pre-historic period. Once they joined the Eritrean- Italian Buya Project, these scientists become more eager to discover additional wonders of the past in the Eritrean Soil.

The researchers are optimistic about future discoveries in the area where the fossils have been discovered. According to Prof. Roberto: The earliest phases of human evolution, that stretch roughly between one to two Million years ago in East Africa, are relatively well preserved but mostly unknown in the rift valleys of different countries such as Kenya, Ethiopia, Tanzania and  at times it even stretches to South Africa. We have a relevant number of specimens traced back to the period from around 1.8 to 1.4 Million years ago. With this respect, we have a variety of specimens showing a brief variation; but we are quite happy about the fossil record. And we have coherent hypothesis to explain the earlier phases of human evolution, at least in this part of the world. One more difficult is that the transition period around one Million years ago from the human form of the Homo erectus or homo-ergaster in Africa to a later more advanced form that depend on the discourse called homo-heidelbergenesis.

The new discoveries would definitely enable the researchers fill the missing linkage of human evolution. In this respect the Professor said: “We suspect that the cranium from Buya, the original cranium, and likely the specimen we have discovered is the most appropriate discovery to fill the gap of the transitional period between homo-erectus and homo-ergaster and of the later evolved humans.”

Contrary to the earlier discoveries of human fossils in the Eastern part of Africa, the human fossils that have been discovered in Eritrea are very intact and with detailed forms that could vividly show the progressive evolution. Prof. Roberto said in this regard “This is because many details of the cranial architecture are absolutely progressive; more derived with the reference to other forms which are dated from 1.2 to 1.4 Million years ago. So around one Million years ago we have finally some specimen which could announce the origin of a later evolved form of heidelbergenesis which will be spread finally not only in Africa but also in Europe and Asia.”

The cranium recently discovered in Buya is quite impressive to which Prof. Roberto cites as a significant discovery as a whole. “We have already shown how the cranium from Buya, which is quite well preserved, is not a typical homo-erectus but more derived with many cranial features announcing more progressive form of later homo going towards an architecture of the cranium which is closer to our architecture than to the typical homo-erectus which is quite archaic in terms of general pattern,” the professor added.

Prof Roberto also expressed a concern about the difficulties of identifying the sexes of the ancient findings based solely on the cranium. “What we think is that we had difficulties, for instance, in determining the sex of those individuals, and this is quite important. We have, relatively, a pattern of variation but still this is not enough to sorting the sex difference.”

Such difficulties may happen due to lack of a detailed knowledge of the different phases of human evolution.  On this matter the professor said “This is not only because of a poor knowledge about human evolution but also because we likely have a significant reduction in sexual dimorphic difference in body building between male and female and body size, and the general architecture. This is again another typical derive of modern like feature which is not typical a homo-erectus and is directly characterized by a remarkable degree of variation.

“If we see, for example, the endocrinal brain size ranging from 670cc to 1100cc and over in a specimen from Tanzania there is a very wide range of variation showing sexual dimorphism which is not found up to date here in our discoveries which are compatible with the reduction of sexual dimorphism.  We have likely three individuals even if we don’t know if they are all males or all three females. The discussion is open on this subject, which is quite a matter of discussion because it is critical subject even to today’s humans.”

Once they found the fossil the researchers have been facing problems in identifying the period to which it belongs and as well as weather it is a human or animal fossil. Another researcher, Luca Bondioli, Director Section of Anthropology in the National Museum of History and Ethnography, Rome-Italy, is highly appreciable of the dense findings that have been discovered in the same site. But he said “The major problem we now have is the possibility to analyze the variability in the Buya area. When we found the first skull, we face difficulty not only for identifying the morphology of the skull but most importantly, I believe is the morphology of the face.” He also expressed that the masticatory operation and the change on it are quite impressive.  Because, the most evolved part of the morphology in the direction of heidelbergenesis is the morphology of the maxilla. But if they found the maxilla separated from the skull, it would be complex that needs further geological studies.

With the increasing number of specimen of such human fossils, the scientists would work at ease for they would have a means of comparison that could lead them to a concrete chain of the progressive evolution. Luca Bondoli is optimistic that the new findings would help them draw the complete anatomy. He said that for the first time they had the possibility to work with two or three specimens and they got the possibility to arise variability.  “This population is no more of different individuals. The idea is very similar that the specimen characteristics of all groups in the Buya area are similar without any individual change. One most important thing here is that it has become a study of variability and the characteristics of groups. And finally it is possible to have an idea on what this progressive characteristic in the population to get an idea to the direction of the research process.” He added.

The findings of the researches that have been carried out in Eritrea are in fact very impressive. As the researchers have been eager to conduct similar research there would be more findings that represent to an earliest era. The second part of this writing will cover the briefings of other scientists who have been involved in the research activities.

An outstanding student with dream to write more books