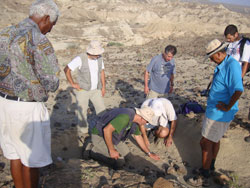 Over one-million year-old human skeleton including skulls and molars has been unearthed in Buya area, Northern Red Sea region.

In the task undertaken by Eritrean and Italian archaeologists, the skeleton of the human species was excavated by Mr. Tsegai Medin, director of research department at the National Museum of Eritrea.

The unearthing of molars of human beings dating back to 1 million 400 thousand to    650 thousand years in the Horn of Africa region was detected by a guard of historical sites Mr. Husein Omar. Mr. Tsegai said that the excavation of such a skeleton is of vital significance in narrowing the human trace gap in the aforementioned years.  He also pointed out that the discovery represents a significant achievement not only for Eritrea but also for the world, besides opening the door for additional research in Eritrea.

Likewise, the director of the Museum, Dr. Yosef Libsekal, said that remains of the human skeleton in Hadimadera around Buya attests to the fact that a site for human inhabitation existed in Eritrea before the introduction of Christianity and Islam.  He added that research would be conducted to further identify the year.

Prof. Roberto Matereli, from Italy who took part in the expedition, stressed on his part the significance of such discovery as regards evolution of human being in Africa in general and in the Horn of Africa in particular. He also expressed conviction that similar human traces would be excavated in the area.