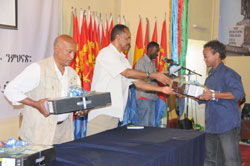 In the Zagre award ceremony that was held in Nacfa, President Isaias congratulated the recipients for their hard work and achievement and appreciated the unremitting support made on the part of parents and teachers.

Noting that efforts of the Ministry of Education with the support of the parents and people to produce exemplary and productive youth has borne satisfactory results, the President called on them to step up their effort for more gratifying outcome.

Presidents Isaias underscored that the Zagre award is a beginning of a new chapter for the recipients and that true knowledge is not acquired in a short time but rather requires continuous accumulation which is measured by productions or accomplishments that require knowledge. He further advised the awardees to pursue their goal with enthusiasm and focus and work hard so as to become successful in their endeavors and make due contribute to their family, people and country.

The Zagre awardees that scored Grade point Average from 3 up to 4, received laptops and other monetary prices in accordance to their results from President Isaias Afewerki and the Minister of Education, Mr. Semere Russom.