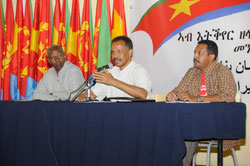 The National Youth Conference was officially opened today in Nakfa town in which more than 650 Eritrean nationals from inside the country and abroad are taking part.

Nacfa, 25 December 2011 – The National Youth Conference was officially opened today in Nakfa town in which more than 650 Eritrean nationals from inside the country and abroad are taking part.

In an opening speech he delivered, President Isaias Afewerki said that the conference is being held at an important time when the domestic situation is on the path of evident development whereas the regional and global atmosphere has entered a new era of important awareness campaigns. He furthermore applauded the youth inside the country and abroad for the national support they had demonstrated and still continue to show.

development and constructive opportunities Eritrea is embarked on. The President further said that it is an opportunity whereby the Eritrea people in general, and the national companies and YPFDJ in particular can have a platform to share the numerous development and national reconstruction programs they each have at their disposal.

President Isaias further said that the priority of this conference and any other upcoming conference is based on national dignity and equal benefits for all and strategically work for maximum outcome by deeply estimating the present and upcoming opportunities and obstacles.

According to reports the National Youth Conference will continue for 6 days.