Popular uprising in different parts of the world calling for justice – outcome of frustration: President Isaias 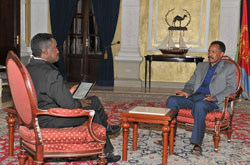 In an interview he conducted tonight with the national media, President Isaias Afwerki underscored that the popular uprising witnessed in different parts of the world calling for justice is but the outcome of frustration.

Asmara, 27 December 2011- In an interview he conducted tonight with the national media, President Isaias Afwerki underscored that the popular uprising witnessed in different parts of the world calling for justice is but the outcome of frustration.

In the first part of the interview focusing on general developments around the world, the President explained that such chain of events basically emanates between societies calling for justice on the one hand, and those regimes that serve by proxy the forces pursuing a uni-polar economic adventurous and monopolistic objectives on the other. This scenario, although hidden, was in essence a phenomenon that erupted suddenly, President Isaias elaborated. He further pointed out that this development, although it could be aborted or face relapse, it is nonetheless impossible to control.

Emphasizing that the main cause of the dangerous situation the world finds itself today is basically an adventurous course of action that surfaced and mushroomed in the wake of the end of the Cold War in the camp claiming “victory”, he indicated that the special interest forces that claim to represent a particular ideology exploited the sudden collapse of the Soviet Union, and thus posed as the ‘sole power in control of the planet’. Moreover, the same quarters argued that the world should not only be directed in accordance with our philosophy but also proclaimed that the world should be governed in tune with our ideology, President Isaias underlined. He further explained that these quarters embarked upon propagating dangerous philosophies and as a result they began controlling world resources and asserting their military domination. As such, the current development is an outcome of the aforementioned realities, the President underlined.

Irrespective of whether or not the world economic order assumes uni-polar, bi-polar or multi-polar character, President Isaias declared: “Unless people lead a dignified and secure life, it is impossible to talk of security at all”. He further pointed out that people would not indefinitely tolerate the greedy and hegemonic order spearheaded by an adventurous philosophy witnessed over the past 20 years regardless of the growing popular voice “Enough is Enough!”

The President also emphasized that regardless of the objective of the existing global and regional organizations, they are in essence subservient to the now prevailing adventurous and hegemonic order. As such, the crisis that the world is currently facing, although operating under various covers should be restructured to meet the demands of the people in the 21st century, he underlined.