The root cause of the prevailing crisis in our region is the destructive acts of external interference, President Isaias underscores 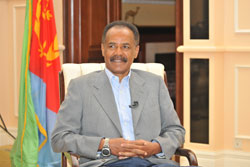 President Isaias Afwerki underscored that the root cause of the prevailing crisis and the abortion of opportunities in our region and that has undermined, and continues to undermine, the steady development of cooperation in the neighborhood is the destructive acts of external interference, coupled with the politics of anchorages. The President made the salient remarks in the second part of the interview he conducted with the national media.

Asmara, 28 December 2011 – President Isaias Afwerki underscored that the root cause of the prevailing crisis and the abortion of opportunities in our region and that has undermined, and continues to undermine, the steady development of cooperation in the neighborhood is the destructive acts of external interference, coupled with the politics of anchorages. The President made the salient remarks in the second part of the interview he conducted with the national media.

In the extensive interview focusing on the current state of affairs in the region, President Isaias emphasized that “it is but naïve to think that stability could be ensured through proxy and the presence of external forces”. The main cause of the existing crisis in the world in general and our region in particular emanates from the forces of external interference stemming from the desire to monopolize resources, the President elaborated.

Noting that achieving regional integration is apparently a demanding task, President Isaias explained that in view of the significance of ensuring a practical homebrewed mechanism for regional integration is a paramount initiative for the attainment of which conscious efforts need to be made. To this end, he stressed that the fundamental foundation remains that of ensuring a dynamic internal stability.

Stating that “the situation in our region and security in the Red Sea zone, the Gulf of Aden and the coastal areas of the Indian Ocean in particular cannot be viewed in isolation from the prevailing state of international affairs”, the President indicated that the oil resources in the Middle East constitute 65% of the global oil resources, and that petroleum remains a decisive strategic consumption item. He further pointed out that such a resource accords the region a major strategic importance; and as such the focus of attention that this resource creates cannot be viewed lightly. Moreover, the fact that the forces of hegemony keen to have monopoly control over the said resources continue to resort to fomenting crisis, and thereby seek to manage the crisis through various excuses, the President emphasized. In this connection, he pointed out these forces have plunged the region into the current crisis.

President Isaias underlined that Eritrea has, over the past 20 years, been pursuing a permanent policy of “ensuring a secure neighborhood” in a region characterized with continuous state of instability. Consequently, he said that the nation had exerted unremitting endeavors towards regional compatibility and fostering strong relations.

However, the party aspiring to sustain its interest through instigating continuous crisis is not prepared to endorse this worthwhile stance, and as such it has been posing obstacles, the President highlighted.

Stating that the absence of regional cooperation is a stumbling block to the forces of hegemony and monopoly, the President pointed out that over the past 20 years, these same forces have been trying to sabotage the fostering of regional cooperation. He further indicated that in order to realize one’s destination, internal stability is of paramount importance which could be ensured through promoting social justice and mutual interest.

As regards the Somalia issue, President Isaias explained that it is the countries in the neighborhood engulfed in domestic turmoil that perceive the unity of Somalia as ‘posing’ a threat. He also noted that the external powers which yearn to ensure hegemony in the region have been working to promote their special interests through these proxy states, and in order to realize their wicked ambitions they resorted to instigating conflict among the Somali people under various pretexts.

In connection with Sudan, President Isaias said that the cause for separation of Sudan into two was directly related with administration problems and external interference. He further underlined that even though the unity of Sudan could not be achieved amid relentless endeavors, much knowledge and experience has been acquired, and that the two Sudans should work in unison towards achieving sound relations without deviating from their course through external interference.