There are programs to be implemented phase by phase towards improving people’s standard of living, President asserts 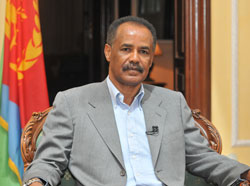 In the 4th and final part of the interview he conducted with the national media, President Isaias Afewerki asserted that there are programs to be implemented phase by phase towards improving the people’s standard of living.

Asmara, 30 December 2011 – In the 4th and final part of the interview he conducted with the national media, President Isaias Afewerki asserted that there are programs to be implemented phase by phase towards improving the people’s standard of living.

The President pointed out that over the past 20 years Government employees and members of the National Service have been fulfilling their duties apparently without pay, and this because in a spirit of sacrifice to bring about fundamental solution. In view of the fact that situations did not allow to secure benefits congruent with their work performance. Moreover, subsidy on basic consumer items remains the sole solution and that it relatively contributed towards alleviating standard of living.

“It is proper that citizens who paid sacrifice deserve due remuneration when basic economic change surfaces”, he underlined. In this regard President Isaias said that until the ultimate solution is fully ensured, the subsidy, although persisting, should nonetheless assume lesser scope and that endeavors are being made to improve the remuneration step by step.

As regards social services in general and in the domains education and human resource development in particular, he pointed out that in the past 20 years since independence, despite the fact that the number of students was on the rise due to the unsatisfactory content of education and mode of presentation remaining below the desired level, and thus short of attaining the set goal the main stumbling blocks should be properly identified. Hence, in order to bring about qualitative change, the main stumbling blocks should be properly identified and tackled especially the need of upgrading the skill of teachers who constitute the main pillars of the inculcation of knowledge and talents, the President underscored.

He further indicated that as professional and vocational training comprises more than 80% of youths, President Isaias said this task should be reinforced. In addition, he stressed the need to actively involve the active participation and encouragement of women in education and other domains.

Regarding the teaching of Arabic, he said that the course should exceed six years, and that there existed shortcomings in the teaching process. In order to easily master the language in a short period, the necessary improvements should be made in terms of teaching methodology and materials, the President elaborated.

In the detailed explanation he gave regarding the re-organization of government institutions and national organizations, President Isaias said that since big government lacks the necessary capacity besides taking time to establish a lean, clean and effective government, along with the measures taken, efforts would be made for their implementation in 2012 so as to ensure the attainment of the set objective.

Replying to a question on the youth who left the country for different reasons, President Isaias recommended that anybody willing to return home can do so. He also asserted that “no harm will befall them upon return to the Homeland”.

In concluding remarks, the President wished all nationals inside the country and abroad, as well as members of the Defense Force Happy New Year. He further expressed that the year 2012 would be one in which the Eritrean people enhance dedicated efforts for more gratifying outcome in the national development drive.

Efforts being made to enhance scope and quality of education