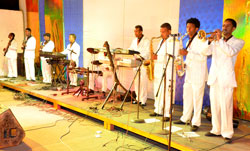 Thousands Eritreans celebrated New Year’s Eve at a concert at Bahti Meskerem Square yesterday 31st of December. The concert which was broadcast live on Eri-TV also hosted famous musicians that performed for the thousands that attended.

Asmara, 1 January 2011- Thousands Eritreans celebrated New Year’s Eve at a concert at Bahti Meskerem Square yesterday 31st of December. The concert which was broadcast live on Eri-TV also hosted famous musicians that performed for the thousands that attended.

Noting that we are bidding farewell to the year 2011 full of hope and certainty, director of the National Holidays Coordinating Committee Mr. Tesfay Berhe said during the opening of the concert that Eritreans are standing today on secure and reliable ground because of their determined and strong domestic force. He also expressed conviction that the New Year will undoubtedly be one where Eritreans reap the fruits of their toil which they have sown in earnest.

Mrs. Abrahatsion Habtemariam, a national at the concert, pointed out that the peace and respect enjoyed by Eritreans is the outcome of the strong unity and spirit of resoluteness demonstrated by fellow nationals. She further called on the youth to overcome all challenges and to work towards securing development in folds.

Likewise, Efrem Kebreab from Norway also indicated that nowhere else in the world does one witness a place like Eritrea where citizens overjoyed express their heart’s good wishes.

Also Mr. Abdelqader Berihuwo, a national at the concert pointed out the fact that both young and old are celebrating the event as one is a reflection of the strong Eritrean culture of reverence for one another. He further called on nationals to contribute their share of effort in order that that Eritrea achieves higher level of development.

Mr. Tesfay Begatsion from USA on his part said that the fact that we are entering the New Year with a vision of prosperity is a good omen on its own and said that it is better that fellow nationals abroad enjoy events such as these with family and friends here in Eritrea.

Finally, the nationals expressed their well wishes for the year 2012.