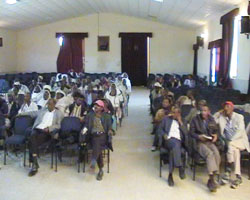 The Southern Region Assembly held its 11th regular meeting from January 3 to 4 under the theme “Our Perseverance and Unity: Pillars for Our Development and National Rebuff.”

Mendefera, 5 January 2012- The Southern Region Assembly held its 11th regular meeting from January 3 to 4 under the theme “Our Perseverance and Unity: Pillars for Our Development and National Rebuff.”

Speaking at the meeting, Chairman of the regional Assembly, Mr. Woldai Gebre, commended the efforts made by Assembly members to properly tackle the demand of the general public’s demands, besides addressing people’s inquiries and complaints in collaboration with concerned parties. He further reminded them to enhance participants in reinforcing popular campaign.

Mr. Woldai further assured that the regional Assembly would do its level best to strengthen endeavors towards improving the living standard of the citizens.Reports by the branch offices of the Ministries and the regional Administration were presented at the meeting, and that discussions were conducted in various topics.

The participants urged the Ministry of Agricultural to supply the necessary pesticides, as well as further enhance educational opportunities.  The regional Administrator, Mr.Mustafa Nur-Husein indicated that the Assembly of the Southern Region has been doing its level best to back up endeavors for ensuring social justice. He also called for enhanced efforts in the same spirit.

The meeting of the regional Assembly adopted resolutions on designating an area of forestation, placing more traffic signs and the construction of more schools. Moreover, it called for still greater public participation in development campaigns.