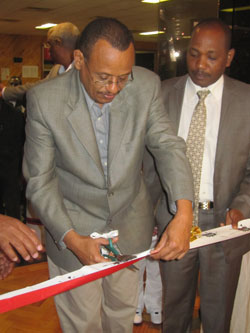 The 12th Eritrea Festival in Australia and New Zealand was conducted colorfully from January 5 to 8 in the City of Melbourne  in which Eritrean nationals and friends took part.

Asmara, 9 January 2012 – The 12th Eritrea Festival in Australia and New Zealand was conducted colorfully from January 5 to 8 in the City of Melbourne  in which Eritrean nationals and friends took part.

The festival held under the theme: “Our Mekete is Continuous” highlighted various programs, including a seminar regarding the objective situation in the Homeland, sports activities, and artistic show.

The chairman of the coordinating committee of the festival, Mr. Yasin Omar, expressed appreciation to the individuals, public associations and institutions who made due contribution for the success of the event. He further called on nationals to bequeath the prevailing unity of Eritrean nationals in Australia and New Zealand which is a reflection of the country’s harmony to the young generation.

Mr. Zemhret Yohannes, Head of Research and Documentation at the PFDJ, , gave extensive briefings regarding the objective situation of the Homeland, the region and the world, as well as the national resolute rebuff of Eritrean citizens inside the country and abroad.

The Eritrean Council General in Australia and New Zealand, Mr. Beshir Idris Nur, pointed out on his part that the Eritrean people have made impressive headway in the development drive overcoming all challenges, and expressed conviction that enemy conspiracy designed to underestimate the development drive would be thwarted through the steadfastness of all Eritreans.

The performance of famous artists and the presentation of shows by children and youths residing in Western Australia added color to the festival, reports indicated.