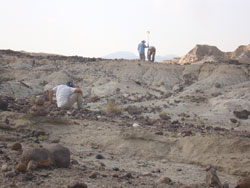 New discoveries resulted a new adventure for further excavation, the excavations have also prompted for a chain of further studies, the outcomes of the studies have been also calling for a further study each of which making researchers wonder of the vastness of the very ancestral history, its associations, its similarities and differences, the very cognitive level of the people who lived in a very ancient period, their contribution to today’s global development and much more wonders that are yet to be revealed with the ever-continuing researching activity. Here, is highly essential to re-empathize that the discovery in the Home site-in Buya which was a geological research had led to a paleontological research which also attracted specialists to concentrate on the like researching activities. Dr. Yosief Libsekal, Director General of the National Museum, said “The multidisciplinary activity  which is indeed a wide discipline covering a wide area were geologists, sedimentologists, paleoanthropologists, paleontologists, archeologists and other specialists have been involved  helps Eritrea to have an effectively reconstructed ancient history,”

According to Tsegay Medin, paleontologists, the latest excavation of an ancient tomb in Mulhuli-Amo have opened a venue to a new discovery and also created an opportunity for further study. What the researchers’ like Tesgay discovered is a uniquely different burial system that may have been practiced during the pre-Islamic and pre-Christianity era.

The researchers  agree that the need for systematically studying the different periods of history is of a vital importance in filling a gap between a million years and the very latest Holosene period that stretch from around 10,000-to-12,000 years ago. Hence, it requires a study to be conducted both in the highlands and the lowlands to have an idea of the most recent and the very earliest phase of human evolution. Some of the researchers have an opinion that deposits older than 200,000 or 300,000 could not be preserved on the highlands but they expect to find much older deposits in the depressions.

Even though they don’t conduct a systematic survey on the highlands of Eritrea the scientist who have been engaged in cooperation partnership with Eritrea’s National Museum said that during their stay in Eritrea they found, in the highlands, many relics that represent the Middle Stone Age, Pleistocene period or the Upper Paleolithic era such as the rock paintings they observed in the historic sites of the Southern region in the places around Kohayo, Metera, Belew-kelow and other places of the country. Most of the relics in highlands have been discovered on the surface but are not stratigraphic findings which are much easier to be discovered in the depressions.

Since there have been so many discoveries in the range of one year time, the researchers are now concentrating to conduct further researches in the specific spot around Buya area. However, they have also programed to initiate a study on some specific spots in the highlands. It is important, at this point, to notice that the deposits discovered on the lowlands have proven to be older than to that of the highlands. But, since the highlands were also much less higher than that of today, there is a fair potential to accommodate deposit of high importance.

All the scientists who have been working in Eritrea share common views that the recent findings represent not only the history of Eritrea but the history of humanity in general. “We are now in Buya. Because, Buya is one of the best sedimentary basins of the world where other findings are yet to be discovered and unfortunately oth

er basins of the world have been eroded away,” one of the researchers said.

Finally, Dr. Yosief concludes the very interesting discussions made by the multidisciplinary specialists saying: This research and discovery activity does not only have a national or regional significance but a global importance as well. The recent discovery in Mulhuli-Amo, for instance, have promoted for an enhanced research on the evolution of modern human. Such a finding has a cultural value for the country and for the entire region. It also consolidates that Eritrea is a county where all periods of history are represented. We have paleontological, pre-history, proto-history, and a recent period history all of which having cultural, political and esthetic values that are very important for any specific nation. Indicating that the findings just show the potentials of the country in large the doctor said “In one small specific area like Buya, for instance, we have a paleontological site that cover about one million years as well as the early periods that goes back to about 10,000-to-12,000 years. Considering this small area alone, it indicates the huge potential the country is offering for future researches that could be conducted in different period of history.

The Dismantlement of ELF (Part II)