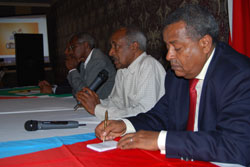 At a meeting with Foreign Minister Osman Saleh in Johannesburg, Eritrean nationals residing in South Africa voiced determination to back up development programs in the Homeland.

Asmara, 16 January 2012 – At a meeting with Foreign Minister Osman Saleh in Johannesburg, Eritrean nationals residing in South Africa voiced determination to back up development programs in the Homeland.

Mr. Osman gave extensive briefings regarding the objective situation in the country, regional and internationals issues, as well as the organization and contribution of citizens inside the country and abroad. He further called on them to strengthen the national resolute rebuff to foil acts of enemy conspiracy.

Moreover, the Foreign Minister expressed conviction that the anti-Eritrea conspiracy would be dealt by staunch rebuff by the Eritrean people.

Likewise, in a meeting he conducted with youths residing in South Africa, Mr. Yemane Gebreab, Head of Political Affairs at the PFDJ, underscored that the achievements the nation had scored were made possible through popular struggle involving the youth as well, and that it would serve youths. He also called on them to reinforce their contribution to the national development and the rebuff against enemy conspiracy. Mr. Yemane further reminded them to strengthen their educational and economic status.

The youths on their part reiterated readiness to live up to the nation’s expectations.

The Eritrean Ambassador to South Africa and the countries of the southern African region, Mr. Saleh Omar, equally lauded the role of Eritrean youths in the nation-building process, and urged them to enhance their contribution.