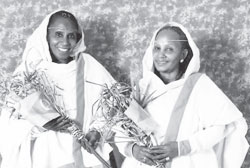 A number of people have been visiting the historic trenches of Nakfa. Every one of the visitors never leaves the site of a chain of trenches that stretch for a number of kilometers without expressing admiration and sharing concerns about keeping  them in their original state and bequeathing the legacies to future generations . These trenches were the very haven of Eritrea’s freedom fighters and also hope of the inevitable independence. Despite people’s admirations and timely concerns, however, it is the two sisters’ Miss. Roma Zeru and Leul Zeru who took practical initiative to achieve the desired end of keeping the trenches intact. This first of its kind initiative to renovate the trenches that were once strongholds of the EPLF during the 11 year fierce battle that was held in Nakfa and its environs, particularly after the strategic withdrawal of 1978, makes these two sisters feel proud to be pioneers of such an engagement.

Giving one’s life for the common cause and equally sharing both the joys of salad days and the bitterness of the harsh times is indeed hallmark of Eritreans. Assisting the families of the fallen heroes and contributing one’s share towards the success of the national development drive is also an indication of the inherent values. Apart from what has been mentioned, keeping the historic legacies of one’s nation is also a worth mentioning value of the Eritrean societies. Hence, the trenches of Nakfa are living monuments that are still harboring the ordeals of colonialism, the selfless sacrifices of all nationals, comradeships of the freedom fighters, and above all a strong will to achieve grand vision that was led through pragmatic calculations.

But what motivated these two sisters in deciding to make due contribution to renovate trenches of Nakfa? Miss. Roma describes the reason that makes them set out to make a contribution towards renovating the trenches as follows: We have for a long time been cherishing in our minds the memories of Nakfa.  But it was when I visited last year the Nakfa trenches to commemorate the 20th June– the Martyrs’ day –that I toured the trenches around Mount Denden. The trenches have their own stories to tell and they do not need any provocation to unfold the stories they harbor in them. They just whisper to every visitor about the heroic deeds they witnessed. I spiritually communicated with the martyrs; I also visited “Fidel Pe” a T-Shaped underground trench. And I decided not to leave the place without making a pledge to donate my jewelry for the renovation of tht trenches’- the very haven of my patriot sons.

Thus, the two sisters donated 64 grams of gold towards renovating the trenches.  “The martyrs have sacrificed their precious lives for our good; leaving their families behind them for they had a trust on us that we would honor their pledge.  Bearing this in mind; we have to protect their home with whatever resources we have.  The grand vision they gave their lives for is to make us live in comfort,” Miss. Roma said.

Many Eritrean families play a leading role in assisting the families of the fallen heroes, but the initiative of these sisters is different. With this regard Miss Roma said that these trenches are symbolic representation of steadfastness. The fallen heroes and other patriots have poured sweat ultimately to beat the expansionists. Had these trenches were not built, what else should stand before it?   Nakfa was the very grave of the colonialists- a place where their dream of domination was shattered forever. “The very meaning of the trenches comes before my eyes and I was not in a position to sleep unless these historic havens are fully renovated,” Miss Roma reiterated.

These two sisters are of the idea that had the freedom fighters not sacrificed their livers for the common cause some of our sense organs would have been rendered silent, other would have been muted and the rest would have been paralyzed and ultimately we would not have survived to witness independence.

Miss Leul also expressed her concerns about the trenches saying: These Trenches were not built at ease. The idea to renovate these historic foxholes was conceived since long. So, measure would have been taken a bit earlier. But, what we have set out to do is just to begin with the meager contributions and there by to pave a way for others to follow. Believing that it is late but have not been forgotten, we planned to remind individuals and associations such as the National Union of Eritrean Women and others share contributions towards that end.

Miss Roma and Miss Leul returned from abroad to their homeland 16 years ago. Like any other Eritrean they have been taking part in the endeavors of nation building process. But, they still believe their contribution is just nominal.

These two women participate each year on the official commemorations of Fenkil operation and as well as Martyrs day. “We travel on these occasions to speak and chat with the fallen heroes. We are leading perfect life; breathing their breath and walking with their strengths.  We view Eritrea as our offspring and also as a mother. We keep an eye on it as a beloved child and it sheltered us being a mother and a source of pride,” the two sisters emphasized.

Finally, pointing out that our martyrs are deeply rooted in our hearts, the two sisters said that everything is very smooth in Eritrea, the new generation need to visit the trenches-the trenches will whisper and tell them grand stories. Equally, the land and the sea of the country have their own stories to tell.