Asmara one of top 10 tourism attraction cities in the world: Lonely Planet website 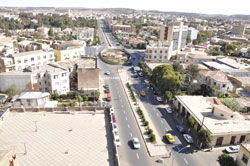 Lonely Planet website has named the Eritrean capital, Asmara, as one of the top 10 tourism attraction cities in the world for the second consecutive year.

Asmara, 23 January 2012 – Lonely Planet website has named the Eritrean capital, Asmara, as one of the top 10 tourism attraction cities in the world for the second consecutive year.

According to a detailed research that the website undertook in 2011, the Germany city of Berlin is listed as the first, followed by the Peruvian city of Ayacucho, Lebanon city of Beirut, the cities of Asmara, Glasgow of Scotland, Len of Nicaragua, and Rotterdam of the Netherlands, Volgograd of the Russian Federation, Yellowknife of Canada and Belgrade of Serbia respectively.

In connection with Asmara City, the website called Asmara “Africa’s most beautiful city”, besides ranking first in the African continent and fourth at the global level for its beauty.

Lonely Planet website also referred to Asmara as being unique for its innovative art deco architecture, which was built in the days of Mussolini’s unsuccessful campaign to create a second Roman Empire. Some of the art deco buildings include Fiat Tagliero, a futuristic fuel station shaped like a plane poised for take-off and Benito’s old party headquarters (currently the Ministry of Education main office).

Indicating that Eritrea has gone through protracted armed struggle for independence and for safeguarding its sovereignty after liberation, the website pointed out that due to the war situation, tourists could not visit the country. At present, however, the City of Asmara is among the major tourist-attraction cities mainly due to the prevailing peace and stability, Lonely Planet website elaborated.