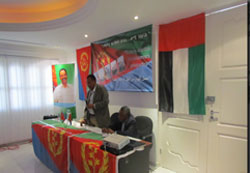 Eritrean nationals residing in the United Arab Emirates conducted a rebuff meeting under the theme “Let’s Work Today for the Bright Future”.

In the meeting, the Head of Research and Documentation at the PFDJ, Mr. Zemhret Yohannes, gave briefing on national development programs and the national rebuff.He explained that building a nation on the basis of self-reliance gives priority to the benefit of the general public, avoid dependency, implement development endeavors on the basis of an independent political path, and ensuring the strategy of the Government and the Front for economic independence.

He further explained that thanks to the steadfastness of nationals and strong leadership, the national development programs along with the resolute national rebuff would culminate in success. He also called on all citizens inside the country and abroad to reinforce the national rebuff.

The participants on their part pledged to do their level best in reinforcing the staunch national rebuff and the success of development programs.