Why do people Gossip…. Habit or hiding from the truth? 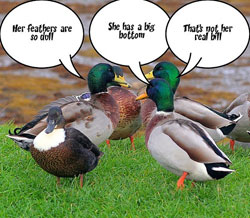 How often do you find yourself talking about some else’s live that has nothing to do with your own?  And have you ever taught about why you are saying those things about that particular person? It might seem that there is no harm done in discussing someone’s imperfection to socially engage in a conversation but the effect of such a chit-chat is deeper. You might come up with a bunch of excuses for raising the person’s name on that particular instance but whether consciously or unconsciously, in a good or bad what we did was gossiping, no matter the reason or the fact.

In doing so we are judging them, and most of the time people tend to gossip about bad thing and what we usually fail to see is that we are interfering with one’s life or the way he or she is leading their life. Some tend to criticize while others advise but the question that needs to be raised here is who are we to tell someone how to lead his/her life? The worst part is that we usually gossip based in limited or false information, and sometimes I even wonder would we act the same way if we know the whole truth from the person, and I am sure that our reaction wouldn’t be the same. After all even the Wikipedia defines gossip as the spread of personal affairs, rumors, half-truths, and even lies about a person or organization, still 66% of our communication replay on gossip.

There are also people that tend to gossip on their own assumptions, I remember once a friend told me that a college of mine is getting married and since those two are not the kind of acquaintance that discuss such matters I was quit shocked to discover this information from him and demanded on how he get to know such a personal information about our colleague then he told me his thorough analysis on her recent behavior, and went on to mention some of what he call evidences like she receive a lot of calls in a day and begun to talk on the phone differently than she used to be, she start leaving the office at unusual hours and the list goes on. I was really taken back by his detailed analysis in my colleague because I didn’t notice all the above things he mentioned although the reason for those aforementioned things may vary than he anticipated, and then after a while my colleague comes to me and told me that she have been having trouble with her land lord and now she have found another house and is moving out.  She also mentioned that is the reason she have been busy and was cutting her work hours at office. This is what really happened but how many of us ask assurance questions on how one get hold of that particular information before we rush the spread the same information to another person. Most of the time people tend to accept whatever is said at a face value without any cross checking or demanding further details, and repeat this same information in most circumstances adding their own assumptions and juicy turns to the rumor.

Why it is entertaining to talk about the bad sides of other people than other positive things or much better talk about the difficulties of their own life, the answer is simple, because according to a number of studies on reasons for gossip people tend to be engaged in a gossip when they are unable to focus on their own life’s ups and downs. Others tend to classify gossip into two categories malicious and innocent gossip and try to point out that the reasons for gossiping as follows: people gossip for if an individual has been hurt and retaliates in anger,  an individual is afraid to confront directly, he or she has a need for attention and approval from ce

rtain others to feel accepted, an individual has the desire to build his or her own position artificially by tearing down others, and  others tend to gossip simply because it is their habit.  All is due to that it is it is easier to focus in other people’s hardship where there is no emotional attachment than one’s own miseries and hardship of life.

nd according to professionals on the issue of gossip, and gossiping the best way to deal with gossip is to maintain your prestige, whenever you hear anyone gossip about you do not get mad, or try to confront or threatened them because  this will only show them how badly you were hurt by the gossip and how fragile you are. Instead you must appear strong and not easily shakable. Take few days to calm down and during this period try to assess the size of the damage that could happen to your reputation as a result of this gossip, and try to see the reason behind such a gossip, one you know that you understand that people unable to deal with their own flaws tend to exaggerate and talk about others. It is also wise to known to whom you reveal your secrets after all as Kahlil Gibran once said, if you reveal your secrets to the wind, you should not blame the wind for revealing them to the trees.