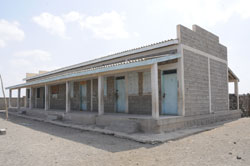 The Southern Red Sea region is a land of opportunities as well as a land riddled with challenges. The putting in place of service rendering institutions in such a hostile climatic area is indeed beyond compare opportunity to the inhabitants of the region. Much of the development undertakings that have been registered in this area of the country require not only huge material costs but resistance of the people who engage themselves towards the realization of a better tomorrow.

Situated in the south east of the port city of Assab, Abo is one of the villages in the Southern Red Sea region. One who travels through this route never hesitates to make a tour and observe the service rendering institutions of that respective locality. Grapping one’s attention, a healthcare center and a kindergarten that are giving services to the inhabitants of Abo, indeed, prompt one to learn the progress that have been registered in the health and education sectors.

Sister Eden Hailu, head of Abo healthcare center, describes the overall healthcare services that have been rendering and particularly the prenatal and postnatal services at nominal prices. She said that giving vaccines to children by visiting their respective locality and conducting health related awareness raising programs have been part of the routine activities of the healthcare center. As the inhabitants of the area have been aware of the benefits of the delivery services that have been rendering at healthcare institution, a number of pregnant women have been availing themselves of the services.

A few meters away but within the premises of the healthcare center one could see a kindergarten which is giving regular pre-school services to the children of Abo and its environs. What is really impressing about the kindergarten is that a pre-school teacher who is in her twenties has been working there for the last 3 years. In these three years, Sister Natsnet Kidane has become fluent speaker of the Afar language

. Pointing out that it is really a blessing to teach in a place which enables you to acquire a much different cultural and linguistic knowledge; she expressed her satisfaction to teach the children at ease with their mother tongue and also with a great passion.

Agricultural undertakings of the Abo-Kiloma administrative area are also very encouraging. Taking into account the arid and semi-arid climatic condition of this respective area, it is very easy to understand that conducting such agricultural activities depending on rainy seasons is really a very demanding task. But, farmers around this administrative area are doing their best in cultivating varied types of crops and vegetables. In about 6 heaters, one could see date palm plantations and other crops, vegetables and fruits and other plantations such as watermelon, pepper, tomato, onion, sorghum, maize which are at good condition.

Despite being an arid place, the Abo-Kiloma administrative area is rich in underground water which just requires no more than 2 meters drilling to find fresh water that could be utilized both for agricultural and for household activities. Thus, if the farmers of this locality exert concerted efforts water deficit could not become a hindrance. The palm dates in particular just need watering only for about three months for they could absorb the underground waters by themselves. So, it is a timely issue for the Ministry of Agriculture and other concerned bodies to take part in utilizing the potentials at disposal and provide the farmers with necessary pesticides.

Any passer by who knew the Southern Red Sea region some years back is obliged to admire the distribution of educational and potable waters supply in such a wider areas of the region. Beylul administrative area which is situated a few km away from the main Assab-Idi route is part of the Southern Denakalia administrative area. Even though it still needs a fence, the healthcare institution of this area is also giving full medical services. What is really worth mentioning is, however, the solar energy powered water supply project. Besides securing its sustainability through judicious utilization, the inhabitants of Beylul have been giving due care in protecting the project from any sort of damage.

Generally, the service rendering institutions that have been put in place in different areas of the Southern Region are very appreciable. But, Berasole administrative area still needs to have such services. Some healthcare institutions that have been constructed in such area have not been equipped with medical instruments and there is also a deficit of medical professionals.

Traveling to the southern Red Seal region one could not miss the region’s potential of producing wind energy. Wind turbines that have been erected in Assab have, for instance, been generating almost 1/3 of the city’s total demand. Wind energy suppliers equipment that has been put in place in many of the villages of the Southern Red Sea is in fact vivid example of such potentials. But, its sustainability would be endangered for proper renovation and maintenance has not been made for long.