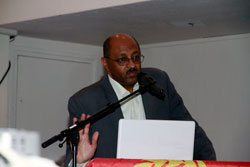 Eritrean nationals residing in Amsterdam and its environs, Holland, expressed readiness to reinforce the national rebuff and pledged to make due contribution to national development programs.

Asmara, 31 January 2012-    Eritrean nationals residing in Amsterdam and its environs, Holland, expressed readiness to reinforce the national rebuff and pledged to make due contribution to national development programs.

In a rebuff meeting the nationals conducted on January 29 under the theme “Our Rebuff Guarantees Our Success”, they condemned the US instigated unjust and illegal sanctions resolution and reiterated readiness to strengthen the national development drive.

The Eritrean Ambassador to the European Union, Mr. Mohammed Sulieman, gave briefings on the objective situation of the Homeland and the region, and explained the development endeavors underway in the country through the self-reliance policy.He further explained that the main purpose of the illegal and unjust sanctions resolution against Eritrea is to halt the development and prosperity achieved by the nation, and assured the nationals that the victories registered in ensuring food security are evidence to the right policies implemented by the Government of Eritrea.

The Ambassador also indicated that the Eritrean people paid heavy sacrifices to achieve independence and ensuring the nation’s sovereignty, and that the current enemy hostilities are a continuation of previous conspiracies. He also assured that such conspiracy would end in utter failure.

Vigorous efforts made to meet demand of plastic material