Massawa, where the first torch of Freedom relayed upon 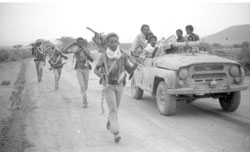 Massawa, Massawa White and Blue
I never get tired whenever I write of you
Oscar Rampone 1972

Some decades back when I was flipping onto the pages of an old magazine I was impressed by the writer’s poetic skills in portraying Massawa. Ever since, the verses remained indelibly stamped in my mind and I keep on reciting them.

The year 1990 ushered a new Era in the political landscape of Massawa. This port city was entrusted with the noble responsibility of carrying the torch of freedom, humbly relayed to it by the legendary town of Nakfa. In February 1990, the loyalty of Massawa in its determination to accept the baton of the torch of freedom was met with fierce disruption conspiracies by the then colonial Ethiopia. In that eventful period, the pleasant climate of the region seemed to be filled up with the rains of shells from the skies and with cannon balls from the artilleries in the ground. The enemy’s intentions were apparent. It was to strike a hard blow, mercilessly and brutally to the extent of wiping out the land and its people. Clinching its teeth with so much guts and prowess, Massawa finally managed to accept the first baton torch of freedom. Irrespective of the enemy’s deadly efforts to test the loyalty of Massawa they never succeeded to give it an “F”. Massawa scored an “A” plus.

“Loyalty is something you give regardless of what you get back, and in giving loyalty, you’re getting more loyalty; and out of loyalty flow other great qualities”

In that memorable time, Massawa was a proud port city that lived to witness the annihilation of Africa’s largest and heavily armed forces.  The torch kept burning its eternal flames for more than a year. The bright flames of the torch of freedom would not be complete unless the relay race continues to cover the whole country. The arduous journey of climbing up towards the capital city of Asmara commenced in the mid of the year 1991. Asmara was the next in line to take the baton of the torch of freedom with unbelievable mind and spirit. The torch was raised high to the delight and glory of the ululating mothers and the jubilations of the entire people from all walks of life. However, the relay race has to continue. To reach to the finishing line the torch has to move fast. The many Pheidippideses marched in such a dramatic lightening Marathon run of form dashing towards Assab where the prized chapter of the march of freedom was finally sealed. The enemy vanished into thin air. Meanwhile the tireless legs were quick to spread to the entire country while the tireless hands had a tight grip on the baton of myriads of torches.  One would visualize a sparkling Eritrea as if it was ornamented with diamonds, or the entire country looking like a Christmas tree.  The era of colonialism was nailed in its coffin with all of its ugly recounts and buried into the depths of the earth’s crust.  Thus a new nation was born and new pages of modern day Eritrea were to flip open in a dramatic historical success.  The Angels seem to join with the people of Eritrea in singing in an inexplicable joy and exhilaration. The torch of freedom was to be kept alight for eternity

Massawa is now preparing itself to commemorate its 22nd year of liberation on the 10th of February, 2012. This writing is meant to pay a tribute to the gallant sons and daughters who dedicated their lives in carrying the torch towards the sanctity of magnificent freedom. Some did not make it to see the eternal flame, having left the responsibility to their comrades to continue the relay race along the track and keep on marching to build up a prosperous Eritrea.

Massawa’s exotic structural beauty of Art goes back to hundreds of years following the invasion of the Ottoman Empire, the Egyptians and finally Italians in successions. All of these colonialists have left a legacy of their artistic dexterity believing that they will inherit this wondrous pearl of the Red Sea forever. Massawa was decorated, painted and white washed frequently, making it the white and blue pearl in the Red Sea. The last of the colonialists, the Ethiopians, however, would spend sleepless nights to hatch their evil intentions of not only disfiguring, but also crippling the economic situation of the port city of Massawa. Their relentless and ruthless bombardment never weakened the fighting spirit of its heroic sons and daughter. History is replete with many facts that the evil doers do not sustain for long. This was true with the Dergue regime that sensed the beginning of its demise when its barbaric acts unleashed in Massawa were boomeranged upon it self.

Massawa has passed through great sufferings and anxiety. It was the second town to bleed so severely following the historical fortress of Nakfa. Every shell and or bullet that has fallen on the city would breed unbelievable fighting ego. It is true that courage sprouts courage and dedication, the undying spirit.  One would say that, the steadfastness and resistance demonstrated by its valiant forces and its people in general could only be considered as a miracle. The quality of being determined to achieve one’s goal motivates one to offer one’s time, energy, and the dear life. What was paid for Massawa was and still is priceless.

In the aftermath of the port’s liberation, most of its buildings were left in rubbles; they were so severely damaged that one would compare as if it was hit by an earth quake with powerful Richter scale never seen on earth.  Any visitor who has set his foot in Massawa in those early days would simply shake one’s head in utter disbelief upon observing the extent of damages that the once glamorous port has suffered. It was almost raised to ashes. Yet one would marvel on seeing the smiling face of the people in general and its liberators in particular. Soon the people have to roll up their sleeves to clean and reconstruct, beloved Massawa.  It so happened that in just few years a massive reconstruction works was underway to almost completely restore the beauty of Massawa, albeit to some of its structures still pleading for rehabilitation.

In the following years Massawa restored its glory of its white and blue features and became a nucleus of domestic and international tourism and it heightened its attractiveness more so by becoming a hub of international shipping. In the 60’s and 70’s people in Massawa used to wear white dress as it protects them from the city’s parching heat, because of its  bad conducting composition. The white sands, white dress and the blue ocean make Massawa white and blue and thus more adorable. A tourist visitor one’s told this writer that Massawa has one of the finest beaches on earth. He said, “What a spectacular place to enjoy”

Massawa is unique. It sits in a most strategic location in the Red Sea. Moreover its geographic features safely protect it from any storm, thus creating so much ease and enjoyment to the visiting tourist.  The beaches of Massawa are safe and comfortable. No sharks are seen and there are no storms to threaten swimmers. It is because of its pleasant climate that surfing as a sport is not much known along the beaches of Massawa. Similarly its comfortable geographical position is well suited to sailing vessels whether for commerce or leisure cruising. There is no risk of dreadful gales that can draw the attention Beaufort scale and thus of marine insurance.

Present day Massawa is quite modernized. Its free zone is under development and expansion. It is therefore quite obvious that Massawa has warmed up its engines ready for take off. In the not distant future Massawa would stretch its wings up in the skies and it will be a world renowned exemplary port. Future statistical report will discuss about fast docking and undocking of vessels, admirable productivity report, speedy customs facilities, vibrant free zone activities and many memorable days reportedly enjoyed by continuous flow of tourists. The airport is to witness an incredible number of planes landing and taking off with tourists and business men. It will then be a matter of the Management of Time. Professionals will ensure that fast services measured in a range of minutes would always have to be maintained. State of the art mechanical appliances will be in place. Scanning of goods, while still stuffed in containers, would be computerized so as to save time spent on considerable queue. In the final analysis saving in time would entail a return in saving of money. Service giving would be at its level best. There would be much demand by the service seeker.  In our contemporary competitive world, Massawa would be a leading port in the Red sea far surpassing many of the neighboring ports.