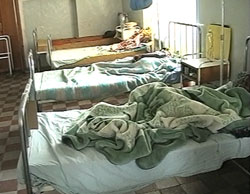 The second phase of the construction of Senafe Hospital is in progress, according to the supervisors of the project.

Senafe, 3 February 2012 – The second phase of the construction of Senafe Hospital is in progress, according to the supervisors of the project.

Explaining that the construction of the first phase has already been accomplished, they called on the pertinent bodies to tackle shortage of some equipment for finalization of the project.

Pointing out that the previously existing hospital in the town was destroyed by the invading forces of the TPLF regime, the supervisors said that the hospital is expected to play due role in rendering reliable health service.

The hospital which is under construction at an expenditure of around 64 million Nakfa comprises surgery room, laboratory, x-ray, emergency, delivery room and pharmacy unit.

Reports indicated that there exist 5 hospitals, 50 health centers, 19 health stations and 3 mother and child health care services, among others in the Southern region.