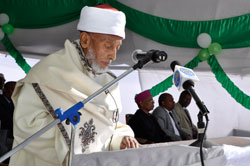 Senior government and PFDJ officials, religious leaders, ambassadors of various countries and invited guests participated in the ceremony held in Al-Qulafa Al Rashideen Mosque here in the capital. Speaking on the occasion the Eritrean Mufti, Sheikh Al-Amin Osman, called on the public to extend its assistance to the needy.

He commended the patriotism of Eritrean citizens living abroad and extended good wish to EDF members.  The chairman of Aukaf for Asmara on his part gave briefings on the history of the holiday, as well as the long journey by Prophet Mohammed.

Religious songs and performances presented on the occasion added color to the ceremony.