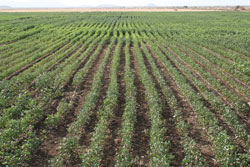 Drip irrigation systems put in place throughout the country last year have resulted in bumper yield of fruits and vegetables, an annual assessment meeting conducted on the 2nd and 3rd of February by the Ministry of Agriculture underscored.

Asmara, February 5, 2012- Drip irrigation systems put in place throughout the country last year have resulted in bumper yield of fruits and vegetables, an annual assessment meeting conducted on the 2nd and 3rd of February by the Ministry of Agriculture underscored. The assessment meeting revealed that drip-irrigation mechanisms set above and beneath macro-dams as well as water reservoirs have played a pivotal role in the bumper yield recorded last year.

Moreover, it was indicated that effort would be exerted on planting various types of oil-seeds as already 80 hectares of land planted with an oil-seed called ‘retch-seed’ on a pilot project has responded positively to drip-irrigation and will be distributed to all regions accordingly.

Pointing out that growing sun-flower and mustard seeds has also began on a lesser scale; the assessment report indicated that the construction of dams and water reservoirs which began last year will be completed soon taking into account the deployment of the new machineries introduced recently. Although the output of dairy products, animal feed as well as bee farming has shown a relative increase last year, the assessment meeting identified that the public consumption demand has outweighed production demand in 2011 especially in the demand of milk.

The meeting also stated that although public awareness has increased in forestation activities last year, irresponsible cutting down of trees should be avoided at all costs and that a lasting solution should be put in place for the provision of pesticides as well as the safety of wild animals that are reported to have grown in numbers last year.

Pointing out the need to further enhance water conservation activities, the Minister of Agriculture, Mr. Arefaine Berhe, reminded participants on the need to continue studies for securing bumper harvests.

Dairy farm in Dekemhare steps up efforts to increase production