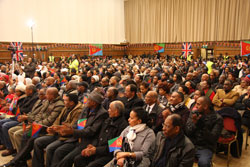 Speaking at the seminar, Mr. Osman Saleh, Foreign Minister, explained that the nation is establishing firm relations with different countries in the domains of trade and investment for mutual benefit. He further reminded Eritrean families to shoulder responsibility as social agents in nurturing Eritrean values and nationalism among the youth.

Also speaking at the seminar, Mr. Yemane Gebreab, Head of Political Affairs at the PFDJ, explained the objective situation in the Homeland and the region. He pointed out that at a time when the people and Government of Eritrea are registering remarkable economic and development activities on the basis of firm unity; the frustration of enemy quarters is on the rise. Under such circumstances, the Eritrean people inside the country and abroad are determined to reinforce the national rebuff.

Mr. Yemane further explained that in order to attain higher level of development the main programs for 2012 and beyond focus on strengthening the national economy, enhancing diplomatic activities, and called on all nationals to reinforce their organization and participation in national development endeavors.

The participants of the seminar reiterated their resolve to reinforce the national rebuff standing alongside fellow citizens and the Government and thus live up to expectations.

Keren: The core of all beauties (Part II)