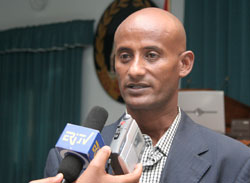 Along with the satisfactory outcome registered in sunflower farming experiment, farmers would be encouraged to introduce the practice on a bigger scale.

Barentu, 7 February 2012- Along with the satisfactory outcome registered in sunflower farming experiment, farmers would be encouraged to introduce the practice on a bigger scale.

The head of the Agricultural Ministry’s branch office in the region, Mr. Meseret Gebremichael, indicated that sunflower plantation which has been experimented in 10 sub-zones, including Aligidir sub-zone has registered satisfactory outcome, and that endeavors towards enhancing it have been reinforced.

Mr. Meseret also indicated that 33% of the nation’s animal resource is obtained from Gash-Barka region and that about 120 million liters of milk are produced annually, although the greater portion of such resources has yet to be adequately harnessed in view of the nomadic lifestyle of the inhabitants.

He further explained that taff farming introduced in Forto-Sawa has registered satisfactory outcome and is being applied in a number of farms in Haikota and Tessenei sub-zones. Moreover, research is underway to introduce soya-bean and the like in the region.

Mr. Meseret also pointed out that plans to engage farmers in producing a variety of crops, vegetables and oil seeds are being implemented in the region. Besides, around 1 thousand quintals of medicinal herbs were exported last year, in addition to incense and gum-Arabica which are also produced in the region.

Inhabitants of Anbesetegeleba express satisfaction with provision of social services

Celebrations of Operation Fenkil commemoration to be held February 10-12