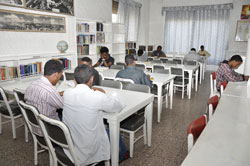 He explained that the main objective of the library is to develop the reading habit among citizens, and that it has been striving to provide digitalized service. Mr. Ephrem further indicated that the necessary preparations are being made to commence such service soon. He also stated that increasing the bandwidth of the internet service fourfold would enable beneficiaries to get efficient service.