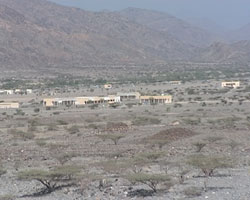 Comprising six administrative areas such as Ararb, Ilababu, Hager, Adobha-N’us, Gheremie and Reba’aday, the Adobha sub-zone has around 15,000 inhabitants most of whom are from the Hidarb and Tigre ethnic groups. This sub-zone which is situated 75 km way from Nakfa borders to the North with Sudan, to the west with Anseba region, to the South with Nakfa sub-zone, and to the East with Karora sub-zone. What are the development undertakings of the sub-zone which is situated in a strategic geographic location that borders not only with different areas of the country but also with a neighboring country-Sudan? Let’s see!

Since the inhabitant of the Adobha-sub-zone lead a nomadic life style, much of Government’s efforts were focusing on resettling them in an area where they could get viable social services. The regrouping of more than 4, 00 families in Adobha-N’us is, for instance, a best example of making people lead a settled lifestyle through the provision of varied services.  In 2010, following to that of regrouping in Adobha-N’us, nomads of Ilababu administrative area were also moved to permanent settlements.

As regards educational services, the Habero area has, so far, if not for secondary schools, secured an access up to junior school level. A primary and another junior school in Adobha-N’us administrative area and primary schools in each of the three administrative areas of Ararb, Ilababu, as well as Kedhat have effectively been giving services. But, what the future of the students of this sub-zone would be after the completion of their junior level

academic carrier? This question indeed seeks a sensible answer. Thus, to meet such shortages of educational facilities, the students are collectively made to pursue their education at Nakfa Boarding School.

Even though there was a vivid shortage of Potable water, more than 10 wells have been drilled to alleviate such a problem. Besides, in 2010, two water supply stations were also constructed in the administrative are of Ilababu. This being the positive developments, the solar power equipment that used to power some of the pipe lines has not been functional. Thus, it requires a due attention if the development so far registered in the provision of potable water is going to sustain.

According to Mr. Ahmed Mohammednur Regib, Administrator of the sub-zone, electric supply has mainly been confined to the social rendering institutions. The range of the supply that has been generated from the only generator has not yet met households demand.

A healthcare center and three clinics that were constructed in the post-independence period have been offering services to the inhabitants of the Adobha sub-zone. It is to be noted that there still exists a gap between demand and provision. As the inhabitants of this respective sub-zone get more aware of the benefits of social services, the demand is also raising despite the growing number of social services giving institutions. Hence, to meet such a growing demand the need for the resettlement of people who have been leading their lives as nomads in a much scattered areas is in fact the primary plan of the sub-zone in the 2012. In accordance to such developments, M

r. Ahmed said that plans have been charted out for the construction of service rendering institutions and particularly that of new healthcare institutions.

Owing to their hardworking nature, the inhabitants of Adobha sub-zone easily cope up with a new life style which is much different than that of being a nomad. These people have been engaged in every development undertakings of the sub-zone such as in the construction of terraces, soil and water conservation, construction of micro dams and other development activities with much curiosity. “Their contribution towards the national development program cannot be expressed with mere words,” Mr. Idris retreated.