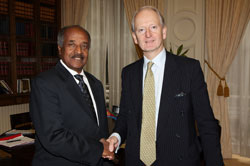 The delegation in its meeting with Mr. Henry Bellingham, Head of African Affairs in the UK Foreign Ministry, conducted extensive discussion regarding bilateral relations, regional peace and the positive role Eritrea is playing, the development progress being registered in Eritrea as well as other bilateral issues.

During their meeting the two sides reached in understanding to enhance the ongoing consultation and engagement between Eritrea and UK in a bid to strengthen their relations.

In a meeting conducted with heads and representatives of existing and potential investors in Eritrea, Mr. Yemane Gebreab, Head of Political Affairs at the PFDJ, gave extensive explanation on the development activities in Eritrea, investment opportunities, as well as the prospects of benefit for UK companies investing in Eritrea.

Reports indicate that many companies expressed their interest on Eritrea.

Likewise, the Eritrean Delegation in the meeting it conducted with Mr. Andrew Mitchell, the Secretary of State for International Development, and policy experts explained that Eritrea has laid the foundation for ensuring economic development relying on self-reliance and indicated that its vision for development is based on trade and investment partnership.

In the meeting, Mr. Andrew Mitchell expressed the desire of the UK Government to have economic cooperation with Eritrea.

It is to be recalled that the Eritrean Delegation conducted a seminar for Eritrean nationals residing in the UK.